Hello there!  Do you feel refreshed after Christmas and eager to start a new year?  I sure do!  I have no particular plans or resolutions, but now that the holidays are behind me I feel like I've got some spare crafty time.  So... one thing led to another and I ended up with three cards today.  I'll blame it on organization.

It started with my effort to find space for a rather large purchase of miscellaneous envelopes -- some from CutCardStock, most from our local Staples.  Just stocking up.  In the process of organizing I gathered up a whole bunch of pre-cut cards and moved them to a more handy spot.  Right away I put one of those pre-cut cards to work... the glossy checkered card here: 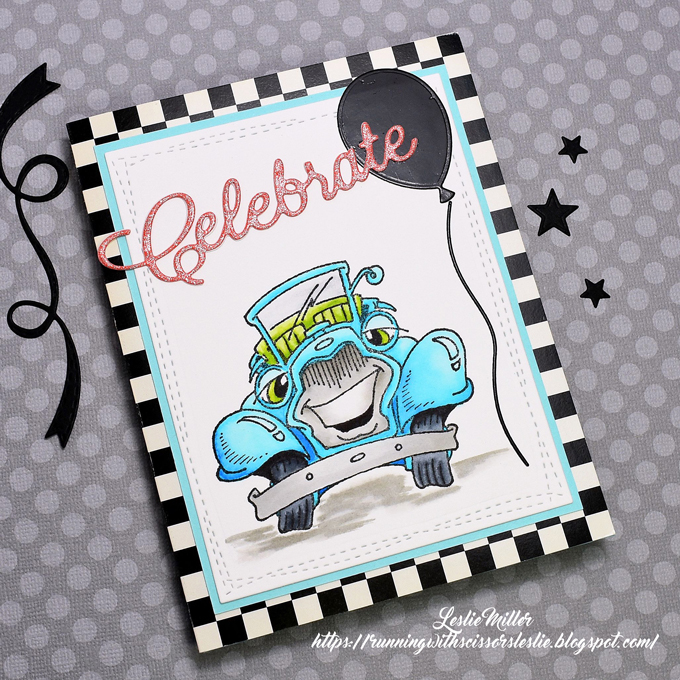 Promise, I'll list all supplies at the end.  I felt the checkered card was perfect for this retired cars set (Henry).  I've colored him often and love him every time.  However, it was an unrelated Fiskars sentiment set that prompted me to use Henry.  Party on the front, huffing and puffing on the inside: 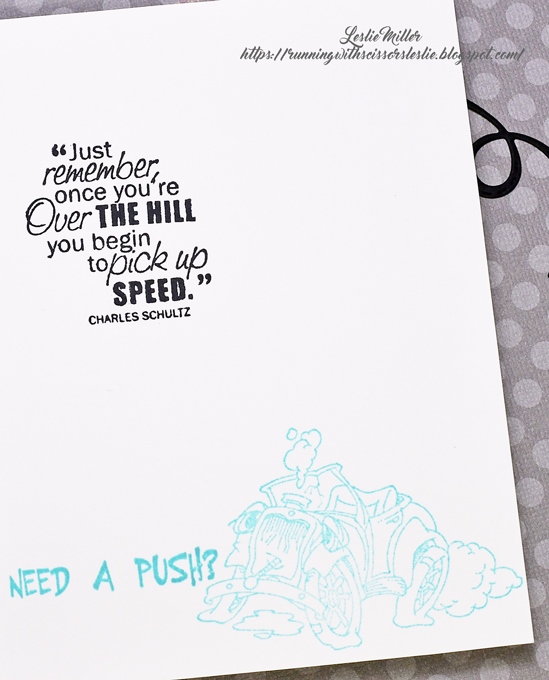 I hadn't used that particular "over the hill" quote yet and it needed a home.

A second Henry resulted from a stamping error and rather than put him, uncolored, into the card parts drawer I colored and cut him out and gave him his own card.  All stamps on this one are from the Henry set.  The smile word was cut apart after stamping in multiple colors.  I now have a spare "smile", sheesh, and will have to use it soon.  Both Henrys are watercolored with Tombow markers. 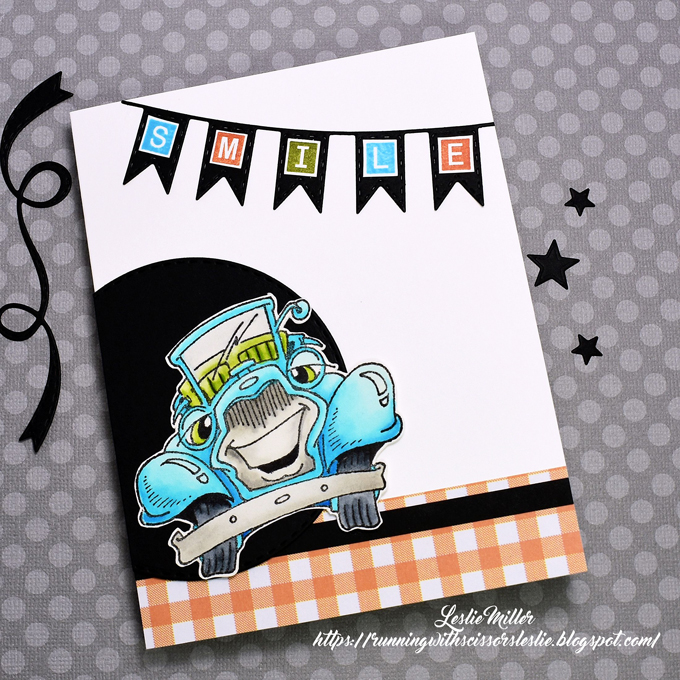 Well, gee, I had one more checkered card base (years old) so I upcycled a birthday card I received from our insurance agent.  That's the glossy white panel with sentiment.  I liked the clean style of the original card, but wanted to dress it up minimally for the hand crafted look.  The glossy checkered card base and glittery balloon were all it needed.  Love how this came out! 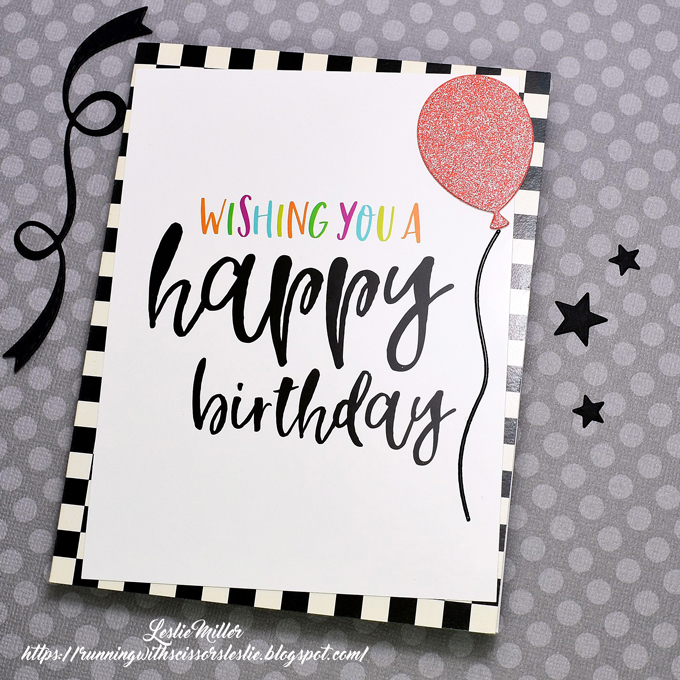 Well, this was fun for me.  Did you think this post would never end?  I know!  Just wanted to put the related cards in one post.  Supplies are listed below my signature.

Wishing you a wonderful start to the new year.  Thank you so much for stopping by!

Oh Leslie! These are the cutest cards ever! I love that car...and your coloring and design are so perfect for it.

What fun cards. Inspiration to use the sentiment card front that was sent to you. Happy New Year to all of you. I'm trying to get my craft room organized after a whirlwind time creating Christmas cards. I'm almost done, but keep getting sidetracked with little projects.

adorable Leslie, pity he's retired. It's so sad when companies go out of business. I love all your checkered DP and inspiration in stamping inside the card.

What a fun crafty day you had playing with your scraps and markers. Your cards will make some friends chuckle for sure:-) I got to play yesterday too with a new stamp set. Will be a few days before I get it posted, but was fun to make a non-Christmas card. Happy New Year, my friend. Hugs...Nancy

OMG what fabulous cards! I have HENRY and haven't colored him up for quite awhile now ... thanks for inspiration!

Fabulous collection of cards. Henry is fantastic...love love love these cards and the checkers are a perfect backdrop.

Good for you for finding a way to use your stamping error. It turned out as cute as the first one. How fun to use a loved stamp again. Your whimsical cards always make me smile as does your coloring.

Perfect cards as usual, Leslie. And fun too! Happy New Year. I look forward to your posts.

oh so cute. love the card and sentiment. Good way to start the new year. Have a great day

I have a few of those retired cars too in my stamp stash and they always made me smile. I love the cards you made using Henry. They are wonderfully designed. And, a happy new year to you as well. I hope it is a nice crafty and healthy one for all of us.

Happy new year, Leslie! Looks like you had fun and got your space ready for the month! LOVE that Henry image and coming up with three lovely cards is a great bonus!

Happy New Year, Leslie!! Good job of using up older things. :) I love all of your new cards. I'm glad you are feeling pretty "free" and have more crafty time!

What an awesome trio set of cards Leslie!Whenever you use Henry, I just have to smile, what a fun image, too bad he is retired! It's amazing what you find when you are organizing isn't it, I came across stuff I completely forgot about. I must say the checkered paper works perfectly with 'henry'. Great sentiment inside too!
Also a great way to use an upcycled birthday card. I think my favourite of the 3 is the second card - I just love the gingham paper as well as how you made the banner. Looks like you are off to a wonderful start of the year! Looking forward to seeing all you create and inspire me with this year. All the best to you Leslie in 2020!

I thought this post was great! I love this stamp set and the cards that you made with it!! I can see you and Henry had a great time! I love the sentiment on the first card! I think you had too much fun with these beauties!! Looking forward to seeing more of your great cards in the new year!

Oh my goodness I love them, the first for the over the hill in the inside is so fun and the checkered base is just perfect for it. Like the layout in the second card, and the banner is cute with it. Great upcycle of the birthday card, great addition with the balloon too!

What fun and fabulous cards Leslie!! They make me smile and as I'm suffering with a horrible cold, I had little to smile about! Thank you for always making my visit so joyful and for your friendship...

Such fun fun cards using Henry and some of your 'stash'! Henry just has to make anyone smile and I love the perfect inside sentiment of the first one!! I am looking forward to a New Year and so far so good LOL...but really last year was a tough one for our family so lets hope this year will be more pleasant. Sorry I have been gone so long (I have a ton of catch-up to do) but with the holidays I managed to get the flu for a week, then right after Christmas we went to the lake house for a week...nice but exhausting and came home yesterday so now have all my Christmas to put away and all I want to do is create...sigh!! Happy New year to you my friend!!!

I LOVE the checks..and of course Henry..he sure makes for some great cards!! I was organizing today too, but no cards were made. I switched things up a bit and maybe it will be easier to get at stuff! Happy new Year!

Both are super fun and I like the different versions with the car. The colors are fun too. Awesome Leslie.

Those old SNS cars are among my favorites! Not only am I grateful to have the stamps, but I love having the digitals, too! Your creations are darling - how could they not be with the fantastic Henry, and the fabulous'er Leslie! The checkered components are simply marvelous, and the color choices, FANTASTIC! AND YES, THAT quote could not be more appropriate! My favorite card is actually your "boo boo" card! I'm pinning both for inspiration later on. As I see the cards, I cannot help but smile at your sidebar, with Miss Lulu and Mr. Wally delightedly looking at you or Rich. Leslie, wishing you and Rich the best year ever, and looking forward to more of your fun designs. xx

These are such a fun cards and the sentiment for the first couldn't have been better! Thank you so much for your nice comment on our DotMCC challenge blog - so glad you found us! Rosi x