Hello there!  I hope I'm finally getting back on track with the card making I love so much.  We were away camping for a week, and then spent most of another week with the ensuing catch up.  How can so much happen while a person is away?  Ah, well, I'm breaking in slowly with two very simple cards using some of my campground coloring.

I took a pile of images that wouldn't require much effort, and ended up doing more coloring than I expected.  When I had a few minutes at home I chose two of them that would be the quickest to put together.  They're both Bugaboo digital stamps.  The first is Floral Frame 01.  This one is so pretty, but in a whimsical sort of way.  Love that! 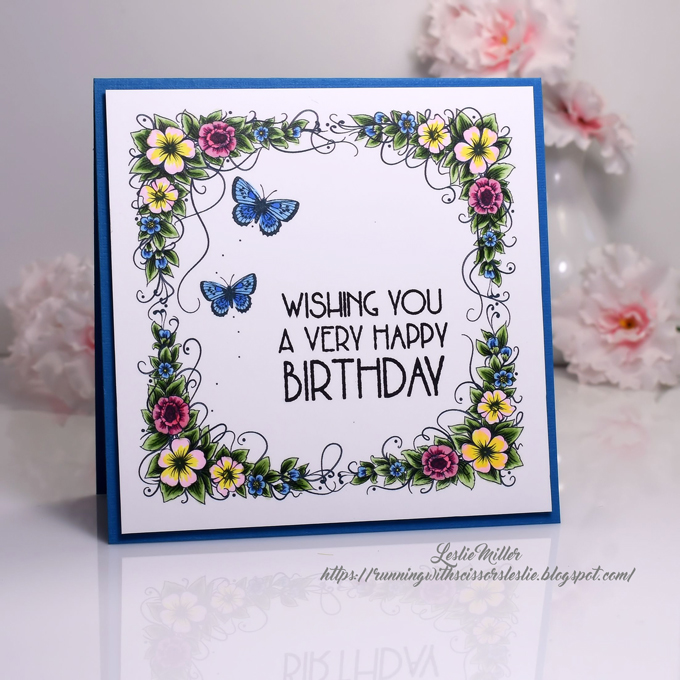 It's colored with Copics on Neenah Classic Crest Super Smooth Solar White.  The sentiment is from the Poppystamps Birthday Blowout set. 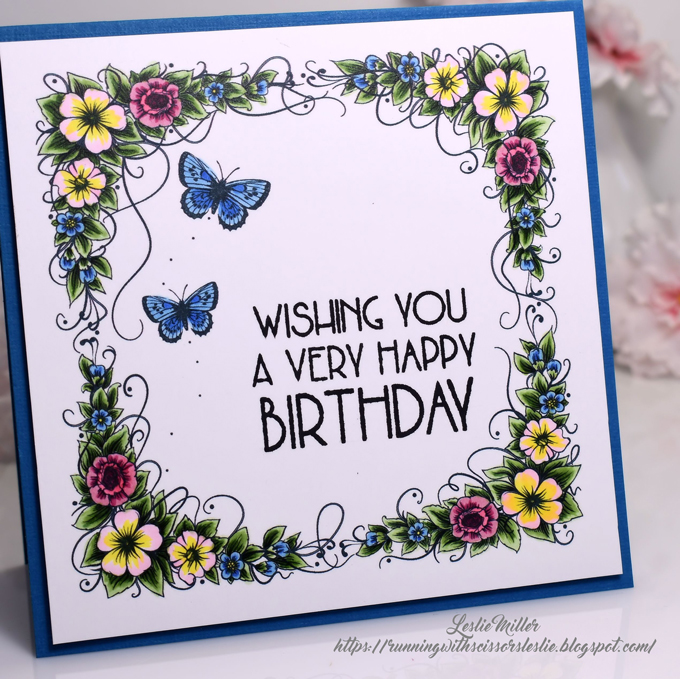 The second card is totally whimsical using the Kitty Your Purrrfect set.  Sentiment comes with it.  I simply added three wonky stitched circles with the Lil' Inker Silly Stitched Die Set and then mounted the panel on a gingham card base.  There's not much gingham showing on the front, but the whole card base is made of it so it's fun when you look at the backside, too. 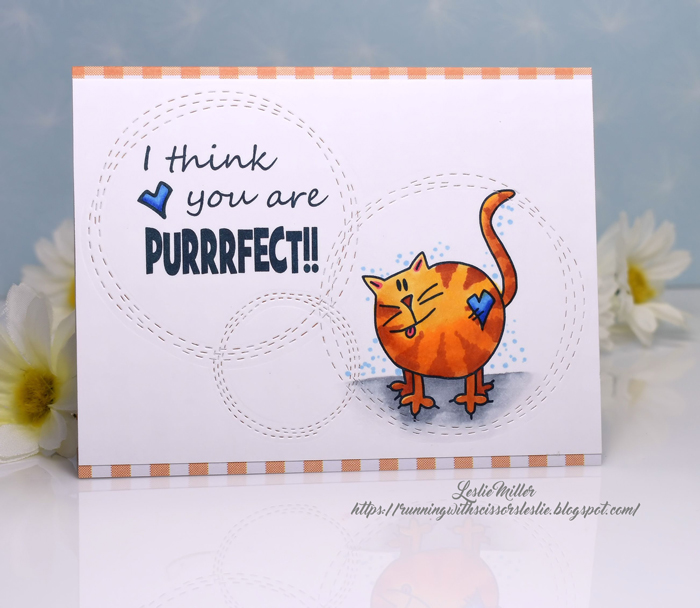 A little more gingham inside and an old, old sentiment from my stash: 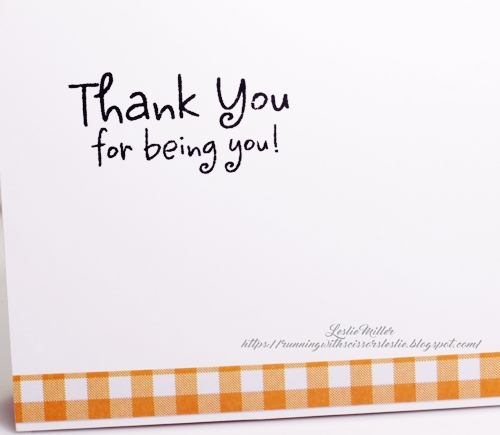 Yesterday I started coloring something new and maybe I can piece together enough minutes to finish it soon.  A little coloring at a time is better than no coloring at all!  Also, I'll someday get around to going through our trip photos and share a few of those on Goldens and Garden.  I haven't been good about keeping up that blog lately.  Some things have happened that knocked the wind out of my sails as far as sharing the Life stuff, but not to worry... keep looking up.  Have a happy day!

So pretty Leslie! Love the flower card of course!
Also LOVE the way you colored the kitty cat!

Awesome love these two cards, both are coloured so beautifully and the flowers are just gorgeous.xx

I definitely love the first card! But then again I'm a sucker for flowers. The second card is super cute and as always I love your coloring skills. Hope you have a good rest of the week!

Amazing flowers card, love those corners so much!! Your colouring is always a delight to see! Fun and sweet cat card, too!

I love both of these!! The flower frame is lovely and as a "cat mom" anything feline pulls me right in! And when you added the gingham it was impossible not to love!! Awesome cards, Leslie!!

Always so fabulous to see what you have been working on and always such fabulous coloring! The first card is a beauty for sure and you do wonders with all the digitals (I so far have lost all mine)...you use those Bugaboo's the best I have ever seen! Love the kitty cat on the second card as I am as partial to kitties as to dogs...the die for that is quite intriguing and it might have to go on my want/need list! Glad you were able to get away but I hear you on the catch up, something I can't see to accomplish in the summer...oh well it will always be there waiting right..hah!

two great cards Leslie, your colouring always blows me away. Those flowers are so pretty and your cat is adorable. I love the stitched circles as added interest :)

Both of the cards are so wonderfully done. I love your coloring and the floral design is so gorgeous with those colors. And, the last one sure made me smile. What a cute card that is. I love he background behind the cat.

LOVE the flower card, really pretty. Both cards are cute. Have a great day

Great cards, Leslie. One so pretty and one so whimsical. It must be fun to have some card panels colored and ready to make into a card.

I so enjoyed these cards you posted today! They are so cute. I love the flower card but the kitten card with the stitched circles is adorable. We have given up getting caught up. With all the rain and then hot weather our outside work is keeping us pretty busy. Hard to believe that JUly is almost over.

Wow! I love what you have done with Jodie's amazing floral frame, Leslie! It's beautiful and delicate. Your crazy kitty is darling! The little heart couldn't be sweeter - I'm wondering if it is a cat tattoo? Fabulous creations. I am sorry that you've received some not-so-good news, and hope things are soon looking up! hugs, de

Leslie, these are both wonderful cards! The first one is right up my alley being as it is flower related. Beautiful colouring, and love the blue in your flowers and butterflies and matching base card, just awesome! And of course your 'kittie' card is so darn cute! The way you added the stitched circles makes for such an interesting background. I am so far behind in making cards, I really need to force myself to get back into it. Our weekends are busy so leaves no time for card making, and it's just hard to get at it after a days work. But still no excuses, just need to do it! LOL. I look forward to seeing some pictures from your latest trip whenever time permits. Thanks for sharing today Leslie, you inspire me always. Have yourself a wonderful day!

Leslie, what a fabulous wreath, the colors you chose and your coloring are delightful. Your second card is just darling. How fun that you used a gingham card base. Sure to delight its recipient.

Wow you did a gorgeous job of coloring that frame, I thought you had stamped a corner die 4 times at first!
That cat card is purrfect and it reminds me of our Opie :) cool use of the stitched circle die.
Sorry to hear something have happened to knock the wind out of your sails, hope things look up soon, and look forward to seeing pics from your trip :)

I am so pleased you got to go on a week fun camping trip and even got to do some relaxing and creative coloring. Both your cards are so beautifully colored and I love your more CAS designs, my friend. TFS Hugs..Nancy

WOW!! Leslie, what a beautiful and adorable pair of cards!!!
The flower frame on the first one is simply gorgeous, with your amazing coloring skills, each little flower shines.
And the kitty card is just adorable, love the way you used those stitched dies around this sweet little image.
I can't wait to see those photos of your trip and I hope that things soon can go back to normal, my dear friend.
Keep looking up.
Sending hugs and love.
Maria.

These cards are just so super delightful! I LOVE that first cards - the flowers are so pretty and wonderful. The second card is so cute, and it's awesome the way you added those circles. Who'd a thunk? :)

Your flowers are beautiful and I love the design... beyond pretty! Oh my that is my big Ginger boy on your second card... He must have posed for this! Amazing colouring and what a super design! Love it!!

I love both of your cards. Flowers are my absolute favorite to work with and you know I love cats. Glad you were able to get away for some camping time. I love the stitched circles.

Love your beautiful coloring frame card Leslie! Your kitty coloring is fabulous! So cute! Don't you wonder how you ever had time to work?! lol

Such beautiful cards, Leslie! Love the whimsical and fun wreath and the details of that image are so pretty! The blue and butterflies are super fun. The second card is adorable too! Wish I was a cat lover but all the ones I've met just don't seem to like me, lol!
Hope the wind is whistling in your sails again soon leading you to pleasant paths. Big hugs to you!

Two great cards. I like the flower border you created and the kitty is darling.