Here in the US we're coming off a long holiday weekend and I sure hope everyone who observed it had a nice time.  We finished up with beautiful weather, had some fun with family and friends, and I even got to do a little stamping.

With this card I tried something new to me.  When our local paper craft store was going out of business I bought a set of three Spectrum Noir Sparkle pens.  Honestly, I had no idea these were meant for watercoloring.  Yes, there I am... under a rock again.  I assumed they were like Wink of Stella with color and, indeed, you can use them that way, but they're a little intense.  After seeing Connie watercolor with them a few times I finally decided to give it a try.  Thanks, Connie! 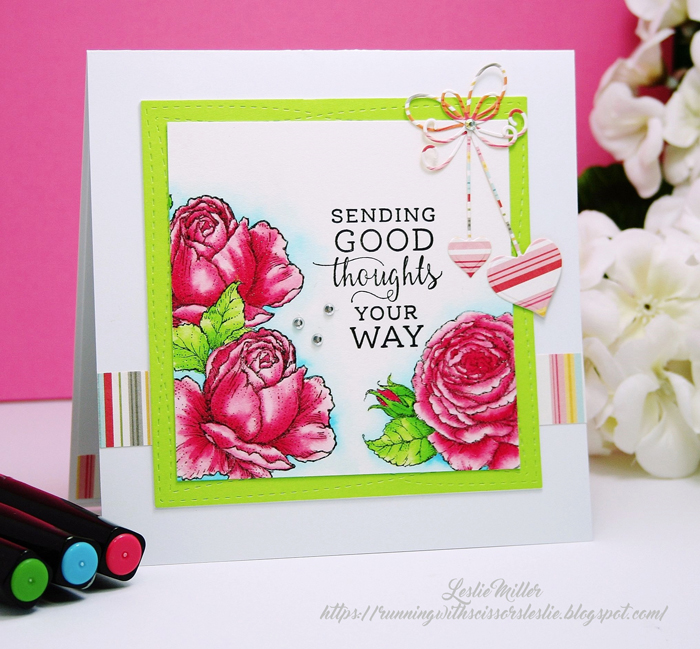 The photo above doesn't show the sparkle, but you can see how nicely they work for watercoloring.  Since I was limited to three pens I chose these Power Poppy roses for my trial run.  I combined two sets -- Everything's Even Rosier (buds and sentiment) and My English Rose (full bloom).

In the next photo you can get an idea of the sparkle these pens lay down, but there's actually way more sparkle than I could capture here. 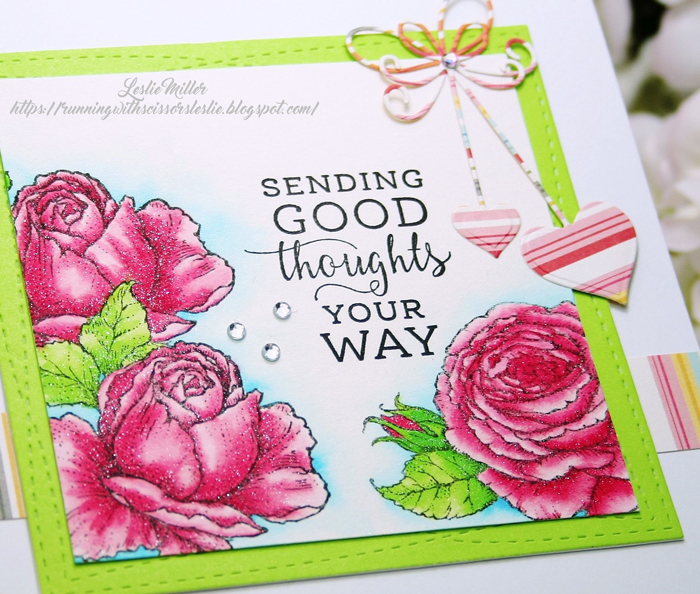 They worked so beautifully and I loved them so much I wanted to run right out and buy more.  However, I decided to read some reviews on Amazon first.  There was talk of the sparkle rubbing off and the pens leaking out during shipping.  I did notice some sparkle came off during handling, but that's nothing new with glitter.  I'd not let that stop me from buying more of these pens.  There's still plenty of sparkle after all the business of constructing the card.  I'm hoping I can find them locally.

The colors I used are Solar Red, Emerald Green, and Blue Topaz.

More card ingredients are listed in the recipe below my signature.  I hope to see you here again real soon!

What lovely roses gracing the front of your card! Those pens truly have a lot of sparkle. I love glitter and this makes me want some of these. I really don't care if it comes off or not..that is one of the perks of glitter. I can tell I've been really creative if I look down and Bella is wearing glitter on her face! I also love that heart die you used as well. Go girl!

Your watercolor roses are wonderful, Leslie! I've been hiding under that rock with you. I did not know the SN glitter pens were watercolor - you certainly created magic with them! I can see the sparkle clearly in your photos, so they are probably REALLY sparkly in person. Your darling striped hearts add such a "loving touch" to your amazing masterpiece, Leslie, and the sentiment is beautiful! Wishing you a great Wednesday! hugs, de

Oh my goodness - you did that with THREE markers??? Amazingly beautiful. Love all of your finishing touches, too.

Evidently I've been under that rock with you, too! I had the same idea about these pens, but after seeing your results I'll be trying them, too! Beautiful design, and I love your sweet hanging hearts!

WOW! I must be under the same rock Leslie! LOL I didn't know these existed but will be on the hunt for them now (thanks for enabling! lol) This is GORGEOUS, as your coloring always is! Beautiful design ... thanks for wonderful inspiration! Was a pretty quiet 4th of July around here this year ... kids were too busy going in 10 different other directions! LOL Thanks again for my daily dose of inspiration! Hugs and Happy Day!

How pretty Leslie! I've not heard of these pens either!

Well, hey, Leslie, look under the rock next to you - hi, it's me!! I didn't know that and now I want to get my SN pens out and give this a go! Your card is literally brilliant!! I have bought markers before from a place called Marker Pop. You may already have these, but I found they have the vintage set on sale right now: http://www.markerpop.com/catalog/spectrum-noir-sparkle-glitter-pen-set-of-12-vintage-hues.html#.WV0JatUrJD8. Hugs, Darnell

These pens are new to me - I loved how the roses turned out! So pretty and sparkly! You have such interesting dies - love the hanging hearts! Glad you had a nice 4th!!

very pretty. I have a pile of them but very rarely use them... Mine are alcohol based, but find some of them dry out really quickly. Have a great day

Learning something new today. I thought they were like Wink of Stella too. You did an amazing job of coloring, my friend. Of course, everything you color deserves a frame.

Whatever instrument you use to color, Leslie, comes out beautifully.

Gorgeous card Leslie, beautiful rose stamping on your card, love the look of those glitter watercolour pens, stunning colours you have used, with a lovely sentiment.
Hugs Pam x

Gorgeous Leslie! A wonderful outcome for using these Spectrum pens for the first time, then again everything you colour is beautiful! Well, I'm with you about these pens I thought they were like Wink of Stella as well - good to know, thanks! Love the finishing touches with the die cut hearts,rhinestones and just a bit of striped paper - Gorgeous creation!

OH MY WORD!!! This is beautiful and your painting is fabulous! I didn't know you could paint with those pens either! Guess there isn't just you been under that rock Lol!

Well, by the looks of the comments we've all been in the dark. What a beautiful way to add another element to watercolor. The second photograph really allows us to see the impact of the sparkle. I would love to see this done on another card. My question is: did you find the amount of glitter from the pens distracting while you were watercoloring? I ask because we usually apply the glitter after-the-fact. Your watercoloring, as usual, is impeccable, and these pens have added another layer lovely interest. And guess what? I realized yesterday that I could watercolor with my Inktense Color Sticks - duh! Evidently there are a lot more rocks in the garden than I thought *haha*

P.s. We are struggling to keep our flowers looking good too. We've had a very wet June. My pots on the porch are really in need of TLC. I may need to re-pot some. It's a struggle when it gets so hot and humid here.

Add me to the rock we have all been under! Had never heard of them before, but the results are just gorgeous! Your watercoloring is always just amazing! Love the way you combined the images for your beautiful card. You always inspire me to try to do better with your amazing cards!

wow this is gorgeous. I'm not listening about the sparkle pens. NOT LISTENING. I'm not buying anything right now. ok, now i want some.

Beautiful roses! The pens sound fun and you sure did an awesome job with them...I love the sparkle.I'll have to look around for some!

Oh, Leslie, what a gorgeous card! After reading through many of the comments, I guess there are a lot of "rock dwellers" among us! LOL! I had no idea about these markers either and would love to see you do another card using them. I love the vibrancy of your colors and coloring, and what a sweet DP bow you've added! Stunning card, as always! Hugs, sweet friend! xoxo

Oh my goodness you did a fabulous job with coloring the flowers, oh how I wish I had your talent :) I have quite a few sets, found them at Hobby Lobby, do you have one of those close by? So love the hearts hanging from the bow too, so Lovely all around!!

Wow! That is so beautiful. First, I just love the flowers. I do love flowers in whatever way, shape, or form, and the colors are so vibrant. They just leap off the card. I hope this is not something else that I "must have." LOL!

Beautiful! These roses look so vibrant and the sparkle is awesome. I have not seen these pens but I might need to get some. Great job for the first round. The heart die cut is totally cute, I like that touch.

WOW, they are totally gorgeous!! I had no idea they were watercolor either, just though they were more like Copics! You know I use a lot of glitter and my trick is to lightly spray after all done glittering with a hair spray, I use an off brand 'Suave' and lightly spray, it h olds it all on and doesn't diminish from the coloring (I would try a sample piece first since I have never tried it on these pens)....but it might be worth a try!! I can see by reading everyone is excited by your card and the markers!