Hi friends!  I have a lot of card needs for the month of July, so some of them have to be relatively clean and simple like these two cards today.  The first one is a birthday card for a guy friend.  Maybe it doesn't look especially masculine, but it could probably be either/or.  He's a very good friend so he'll appreciate it regardless.

Out came my SU! Giggle Greetings again and a not-yet-used balloon die.  The Poppystamps Celebration Balloon Collage is brand new to me.  Yes, I lifted the shopping ban just long enough to take advantage of a not-to-be-denied bargain.  I put the balloon die and the stitched die together and ran them through my Big Shot at the same time.  Very quick and clean. 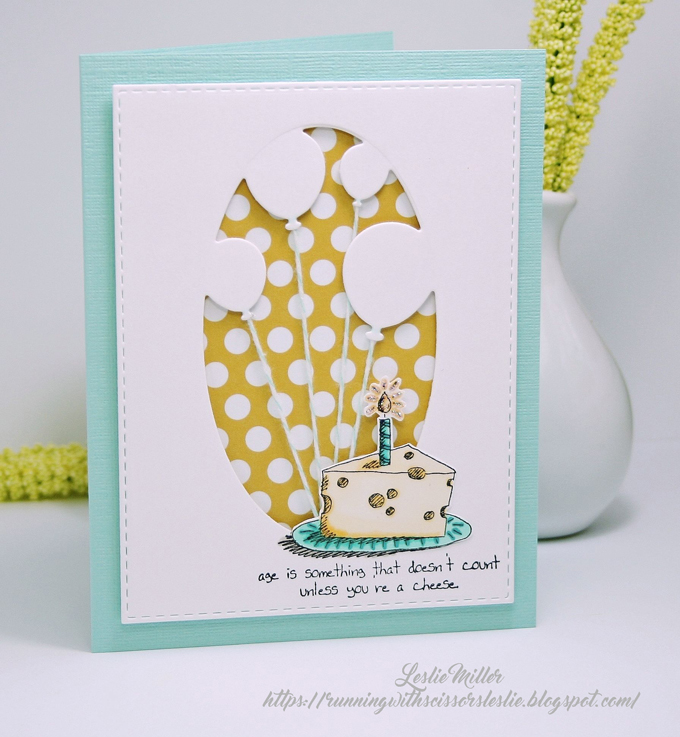 I stamped on the panel after it was cut.  The cheese image was stamped again, cut out and glued in place.  A little glitter on the candle flame.  Strings on the balloons, taped in back.

While I had Giggle Greetings out I decided to make a second quick card.  I've used Giggle Greetings a few times, but not this particular image.  I gave it a simple frame and a ric rac border and added a funky stitched flower -- Poppystamps Stitched Bloom Trio.  Another new-to-me-had-to-have-it-at-a-bargain-price die.  The die set does not come with leaves, so I cut an extra flower in lime green, snipped off two of the petals and turned them around to make perfect little stitched leaves. 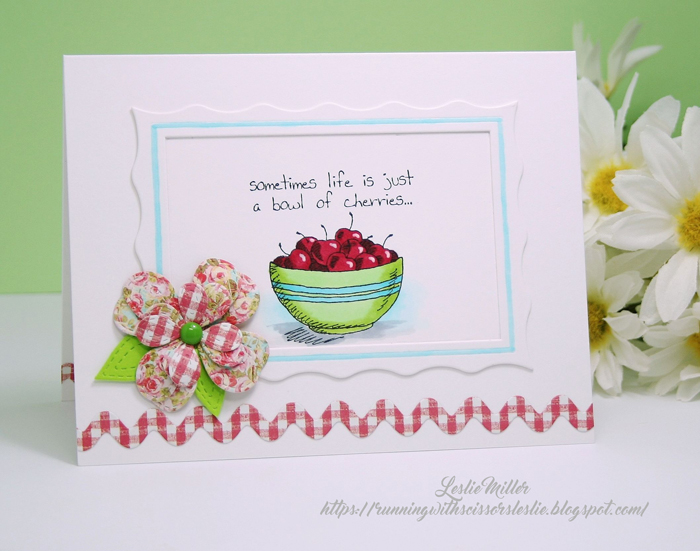 The sentiment inside the cherry card says "and sometimes it's just the pits".  Wouldn't you know, I no sooner made this card than I had a reason to use it.  It's already in the mail.

Till we meet again... stay well and enjoy yourselves!

Both of these are perfect. I love the sentiment on the first one but my pick of the two is the second card. I love everything about it and especially love the ric rac and that flower is amazing! Well done!

LOVE these cards! That balloon frame is brilliant and the papers you chose are stunning! Beautifully coloured cheese too ... Just perfect! Your second card is so different but just as stunning with your amazing colouring and your eye for colour and detail... It was a pure delight to visit this morning as always!

Fun cards that made me laugh out loud at the first one, and the second, well so true...you always have an eye for detail and great bargain shopping, don't you just love a good bargain..(so far I have been good on shopping..well sort of..lol)...that's a fun stamp set, guess I never saw that one,,so cute!! Have a great day, I am headed outside for as long as I can stand it as it is much cooler today without our humidity and heat!

Oh, I love these cards, Leslie! What a great set that is. Love your new dies, too - how fun. As always, your coloring is superb:)

both are cute. love the cheese image. Have a great day

Dang... I saw that balloon die and thought I don't need that now suddenly I do. Fun sentiment and card. I swear I could pick one of those cherries out of the bowl and eat it. Amazing coloring. Love the clean lines and the rick rack.

Wow! These are both incredible. Love them both, but really like the bowl of cherries the best.

Oh my goodness your friend is just going to love that cheese card, that is so fun, I love that sentiment with it. It is so hard not to buy anything from these new releases isn't it, good for you to use it right away :) I totally love the papers you used on the second card for the flower and very creative of you to use the petals backwards for leaves, Excellent coloring on those cherries, so sweet!

Oh my gosh Leslie, what charming cards. I LOVE your frames!

Oh what fun cards Leslie, love them both. Those sentiments are priceless! Love, love the balloon die, so glad you lifted the ban on purchasing anything new for this one. Very creative using the strings for the balloons (at a quick glance I thought it was part of the die!), and the polka dot paper is a perfect backdrop. On your second card, love the stitched flowers, ric rac and how you outlined around the frame. Both a fabulous cards!thanks for sharing,

I love them both! You have the best ideas and designs...and its always fun to visit your blog and see what you are up too!

I love all your cards but these are really cute. I love the sentiments!! Good ones are so hard to find sometimes. I love SU's balloons and your ric rac.

Wowza!!! I love your cards and your craft room - to die for!!!! Loved it! Thanks so much for sharing and I am a follower so I do not miss any of your wonderful art work!!!! Hugs

WOW, for sure! LOVE both of these adorable cards! What fun cards!! Love the stamps & the sentiments & now I want that balloon frame! ha ha You are such an enabler!

Your works is so crisp and beautifully executed! Fabulous photography too!
Thanks for inspiring me!

Sorry this is late, just getting around to looking again....
These two cards are So, so cute.... Love the NEW balloon die... and using the cheese and that saying are perfect!!!!!!!

Oh, Leslie, these are both fun cards, and I love the sentiments...definitely appropriately named! And I think the first is very appropriate for a male! Love them both with the great dies! Hugs!