This is one of those accidental cards.  Honestly, I probably never would have put this together if I hadn't been trying to do something else entirely.  It started with a whole other image and the large square frame from my scrap drawer.  The frame had been cut in white.  I colored it with a Copic marker to coordinate with that other image, but it turned out a completely wrong choice.  Then auto-crafting took over. 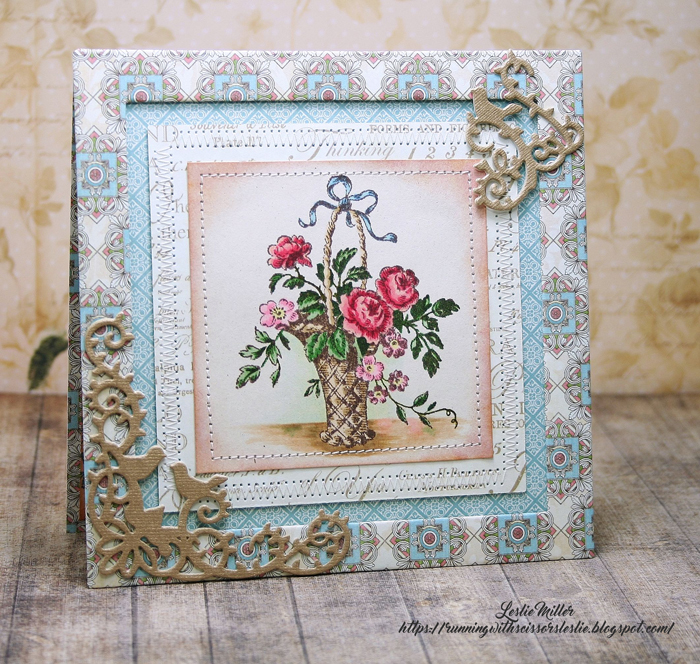 I ended up focusing on the frame rather than putting it back in the scrap drawer.  The Graphic 45 Botanical Tea paper pad is a beautiful collection, but there's one piece I don't particularly care for, so I thought if I used it to cover the frame there wouldn't be much showing and it would look okay.  Alas, I still didn't care for it, but I kept on and on...

I searched through my stamp drawers for an image that would look good with the paper and came up with this ages old rose basket.  Colored with Copics, sponged, layered, stitched, embellished with die cuts... 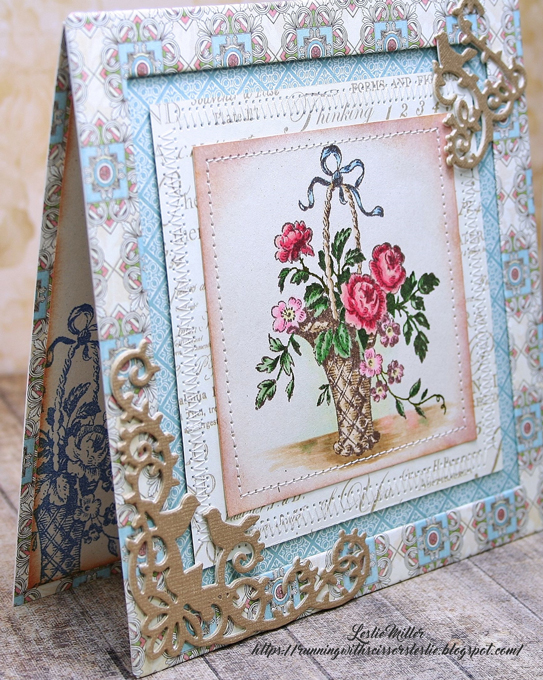 Now what shall I do with this card?  I mail or give away everything.  My June birthdays are done.  It's not quite right for my July birthdays (two of which are guys).  I decided to make it into an anniversary card for a friend who asks for four anniversary cards every year.  This is just her type of card as she loves the hand crafted look.  So... all that time spent and at least it's not for naught.

The frame, by the way, is wrapped in the paper.  You've seen that done before, I'm sure.  It's been a while since I used this method to cover a frame and I'd forgotten how much I like it.  Hopefully I'll do it again soon and then I'll try to demonstrate for those who might be wondering.  My auto-crafting this time did not include stopping for pictures.

Thanks for letting me share my story.  Does anything here sound familiar to you?  You probably have those times, too, where you start out with one idea and end up with another.  I guess that's part of the fun.  Have a happy day!

It may be an accidental card, but it's amazing! Good thing it's framed because it needs to be showcased!

wow this is gorgeous!! You always get the details just perfect. Most of my cards started off as something else entirely. I have a full trash basket!

If this is an accidental card? ------ WOW, WOW, Leslie this is drop dead gorgeous, I kid you not! You have such an eye for detail, (so glad you kept the frame) the colours, your layout, stitching, and the die cut flourishes just finish this of perfectly! I know what you mean about that piece of pattern paper, I have this pack as well, and not fond of this piece, but I tell you it works for your frame. Your flowers are coloured to perfection, your pink roses are stunning! This is a keepsake card for sure, very vintage and classy. So glad you shared this today. have a wonderful happy day!

Don't you just love those "happily ever after" endings? SIGHHHHH, I do, and this is one of them. Frame meets perfect paper, though no one else appreciates the paper - kind of like Beauty and the Beast, right? They become united one beautiful night, and make beautiful babies, just like your die cuts and gloriously colored rose basket. Yes, I do love a "happily ever after" story, and you tell it wonderfully, with such awe and delight! (laughing now). Thanks for describing your entire process. It sounds like my regular style crafting. I awaken with a dream of a card, begin working on it, and it looks nothing like I intended. Thanks for reminding me about the frame "wrapping". I used to do it all the time with photos, framed sentiments, and cards - but not for years! I LOVE IT!

Wonderful card, Leslie. Thanks so much for the inspiration. hugs, de

I'm with the others... if this is what you create with something your not in love with, no wonder your cards are All so Beautiful!!! Your minds eye must be heck to deal with because this is just Lovely, every little bit of it!

Oh yes, that sounds familiar:) The results of your "struggle" are amazing - love the card. Such a great image and so perfectly colored.

Well sound all to familiar to me Leslie, wish mine turned out as beautiful as this gorgeous card though, I have these papers too, love Graphic 45.. I dont think I have heard of frame wrapping? looks good what ever you do, pretty image with your gorgeous colouring.
Hugs Pam x

Oh Leslie this is just GORGEOUS!!! Don't you love when 'mistakes' turn out so beautiful in the end! Your switching of gears certainly paid off here. Well done my friend ... wow!

OMG Leslie, your friend's jaw is going to drop when she sees your gorgeous card (she might keep it). TFS your story and yes..we all have cards that take on an entirely different look than we had imagined :-) Have a wonderful day my friend. Hugs..

Whatever your intentions at the start, this turned into a "WOW" card! Everything just compliments each other and the papers are fabulous with your beautiful basket. Your coloring always amazes me & I wish you lived close enough to give lessons! I have had cards that started out with one idea & revolved into something else entirely, but none as beautiful as this!

Beautiful, Leslie. I love how you described the creative process. I don,t know exactly what you mean by covering the frame, but whatever you did sure works. I admire your tenacity and am thankful you found a home for this beeautiful card that deserves a frame.

I can't!!! I have this stamp too! A whole drawer full of AG stamps and punches! Treasures! Gorgeous card and so glad you went on auto-craft. hehe I'm keeping this email update for inspiration! Every detail is perfect...scrolls back up to look again! :D TFS Leslie!

Oh my goodness Leslie that is just totally gorgeous, I just love the paper you used to frame this, I never thought of using paper to wrap around my frame instead I painted it, I will have to remember that next time :) I just love the image you chose to use, wow that is just beautifully colored, such pretty sponging around it also and just love the layered sewing also to frame it! Your die cuts are just a wonderful embellishment for the corners, I can imagine the gasp your friend will have when she opens this and how blessed she will feel by it! So wonderful!!

A basket of Rose, how beautiful!! What a pretty, pretty stamp, I have been cleaning our bins and bins of old embroidered linens and it reminds me of some of the dresser scarves, gorgeous! I love the framework and yes would like to see how you did that someday...sorry I have bee so slow getting here, haven't spent much time in my creative room, good thing I have 12 scheduled posts to keep me going lol! Yes, I wish there were more places that would let dogs stay during travel, most behave better then some people....well, have a great evening!

Such a beautiful catd!! I love how the stamp of roses turned out. This will make a wonderful Anniversary card. I never heard of wrapping the frame in paper. When you have time maybe you can post how you do it! I wish I had your scrap drawer!! Thanks!!

Sigh...this is breathtakingly gorgeous, Leslie!! That is one card I would have difficulty parting with! I think I have this stamp...going to go digging for it now. I haven't seen a card with a wrapped frame either...I hope you post on that soon! Thanks as always for sharing!

Oh wow! This is beautiful and so perfectly framed.. It's a gift on it's own!

Wowzers! This is one for my Pinterest board. I love all of it and I'm really interested how you wrapped that frame. Love, love, love it!

Oh WOW! Wish my accidents were so stunning! It's truly picture perfect! Love the bird scrolls! This beauty didn't show up on in my email box :(

well when my ideas go a different direction they don't end up like this. So beautiful Leslie! This basket of roses is wonderful and I like how you shaded the base. Beautifully done!