I've said it before -- Power Poppy is my weakness... and that's how I wound up with the entire new release.  I know!  I wasn't going to treat myself to any new stamps until I've caught up with all the not yet used stamps, and I haven't... since (ahem) the last Power Poppy release, but I've been making good progress.  That's my excuse and I'm sticking to it.

So... I started in right away with the Under Glass set.  It's a unique concept with five different images, a bell jar, and three sentiments.  You can use the images with or without the bell jar and vice versa.  I'll share the vice versa later.  As of this writing I've made three cards with this set, just going with the inspiration. 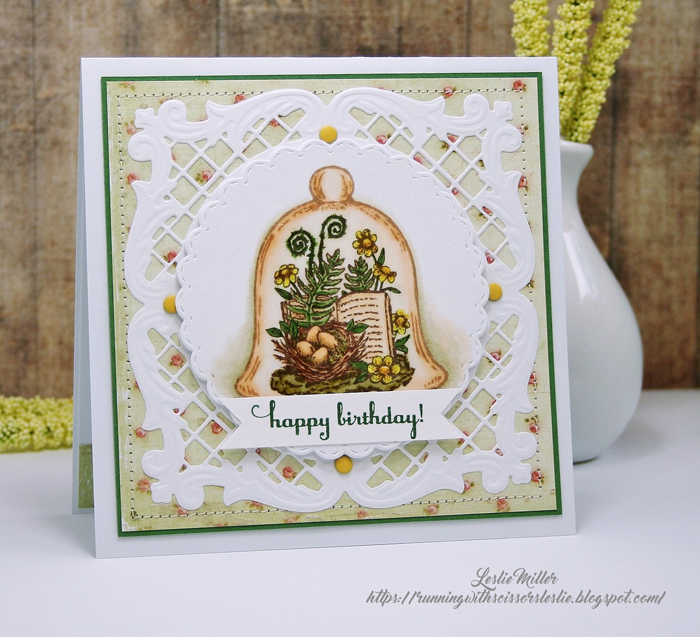 The birthday sentiment is from an entirely different set -- Dynamic Duos: Peonies and Tulips.  Initially I was going to leave this sentiment free for options on future use, but then I thought of a few September birthdays and realized I'd best be prepared.

The nature arrangement was stamped in Memento Rich Cocoa and the bell jar in Memento Toffee Crunch, then colored with Copic markers.  After I put the whole card together with the image panel popped up I coated the bell jar with Glossy Accents.  Since I needed to cover a sizable area with the Glossy Accents I squeezed a pool of it into a jar lid and used an inexpensive paint brush to paint it on the jar.  If the glass looks wavy or has tiny bubbles we can imagine it's very, very old (or cheap) glass. 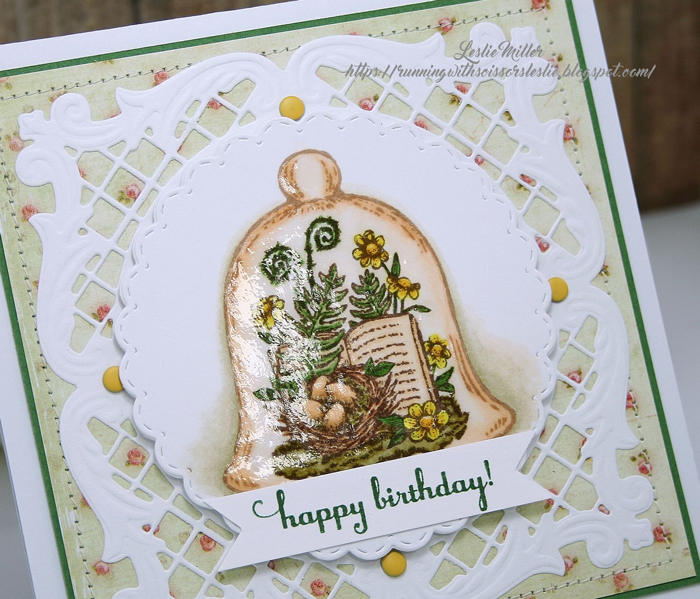 Love that pretty lattice die cut?  It's another one Sherri sent in a very generous and fabulous package of die cuts.  It's Joy Crafts Square 6002/0147.  Everything will be summed up in the recipe below.  I wish you all a very happy day!

I love this bell jar! I can imagine using this with different colors outlining the edges and yes I love that you used glossy accents. I can definitely see how you became a sucker for this collection! The die cut behind everything just speaks to me as I love lattice! Well done you!

Oh how pretty! I love the glass jar and as always perfectly designed and executed!

I love everything about this and I love the Power Poppy stamps, for some reason they are always everything I love...guess I should get some, hmmm! The bell jar is so perfect on that gorgeous die cut behind it and of course adding the glossy accents even adds more perfection! I have a cute little bell jar on a stand just like that, I need to get it out for fall, you have inspired me!!

we all have our weaknesses... Nice card and stamp. Have a great day

Gorgeous design for your beautifully colored nature bell jar, Leslie. I love your die cut frame and pretty DSP background too. I can't wait to see this card and your other new cards In Real Life..today!! I am so looking forward to our play day:-) Hugs...

Oh, how weak we all are when we see something we love. I can see why you could not resist because this is gorgeous and the die cut background is perfect. Thanks for the tip about the glossy accents.

Oh my goodness that is just gorgeous, I so love the colors you used, does give it that vintage feel and the glossy accents gives it a great touch of glass, such pretty papers and lovely framing of it all with that die!!

Another stunner, Leslie! Beautiful coloring, and yes, I love that die-cut lattice piece. I also love the stitching and the glassy look.

Hi, Leslie! Sherri surely did treat you to some beautiful die cuts. It's a pleasure seeing you use these beauties on your lovely cards. I want to nestle into your warm and cozy glass bell. As a child, I used to daydream about being small as a bug so that I could see life from a different perspective. All kinds of thoughts and innocent sweet ideas came to mind in those days. it would be great if we could adjust our sizes like Alice in Wonderland did, only with a little control, and in pleasanter circumstances.

Oh - yes, back to your warm and cozy, cottage-feel, delightfully whimsical creation -- great use of the glossy accents. If PP is your major weakness, please do imbibe. That way I can enjoy all your lovely creations with the fabulous Leslie-style coloring, using PP's newest gorgeous images! Marcella does have a way with drawing beauty, doesn't she? Thanks for sharing your beautiful creation, Leslie! xx

What a pretty card. I love the lattice die and the bell jar is gorgeous! We all try to be good, but......it was for a good cause!

The bell jar is beautiful! I love that lattice die cut too...such a gorgeous card Leslie!

This is so gorgeous! I love that lattice die. I may have to look for it. This set is one of two that I just got from Power Poppy also. Now if I can just find a few minutes to steal away into my craft room!

Ah! Leslie, it’s just dreamy! From the neutral tones on the glass to the warmth of the cozy scene, to the glossy accents and that gorgeous die! So glad you splurged, you always bring Power Poppy to life!

Oh, Leslie, this is so delicate and beautiful! I love these sweet scenes, and what a gorgeous card! I love your coloring and really love how you've made it look like real glass. And then, my friend, you did it! You tempted me with this exquisite die! Eek! It's gorgeous and works so beautifully with the cloches. Oh my! Love your DP and the stitching. Stunning as always, and I agree with Donna above that said you bring your Leslie-style beauty to cards. Oh, how I look forward to seeing more of these cloches! I should ink mine up as well...and, yes, I caved too! We belong to the same club!! LOL! Hugs!

Oh my Leslie, this is stunning! I'm with you, I have a real weakness for Power Poppy images. I have been good at not buying the last few months, but I just had to have this last release as well. The bell jar is coloured in such soft neutral tones, it has a vintage feel to it. Love the die cut you layered this on, hmmm... think I might need this die cut as well. And your paper behind is perfect. Love the glossy accents - you think of everything! Now I just need to find time to colour up some of these. Have a wonderful day!

What a lovely card, Leslie! I love when a stamp set is so versatile that you are inspired to ink it up right away!