Hi, there!  We've got another Double D challenge for you today --  Ric Rac or Zig Zag.  I couldn't help but make a sewing-themed thank you card for my crafty seamstress friend. 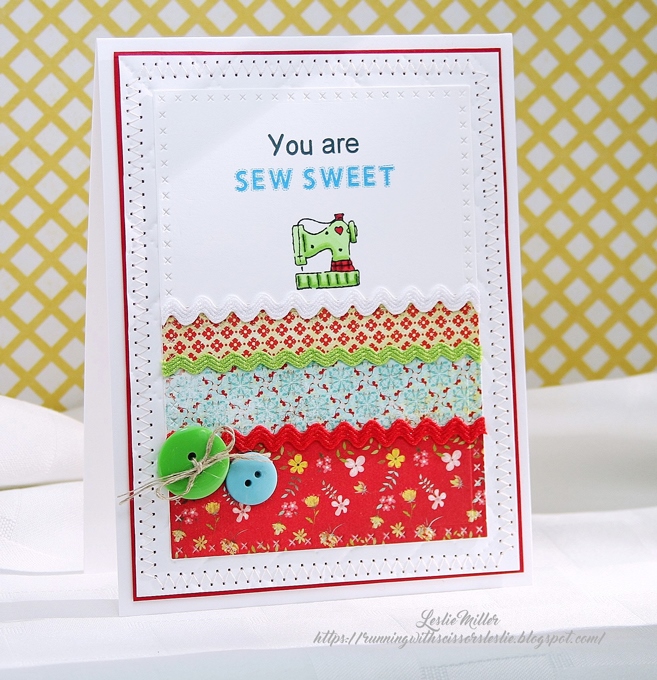 When you look at the mood board below, you'll see what inspired me. 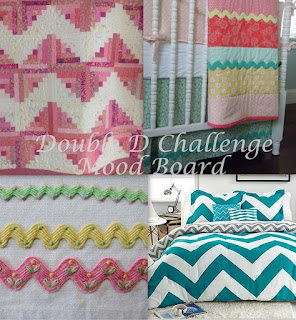 I'm a little nuts about ric rac and have lots, including a ric rac die set.  Check out the ric rac die that will go to a lucky random winner:

The sentiment on my card is computer generated using a font called "Fabrics", which I downloaded here.  So many fabulous fonts on that site!  The itty bitty sewing machine is an old D.O.T.S. stamp.  There's some quilted embossing on the zig zag stitched layer, but most was covered with the top layer.  It's more apparent when seen in real life.  Of course, I had to add some buttons, which are always so dang cute on a card, but I generally shy away from their lumpiness. 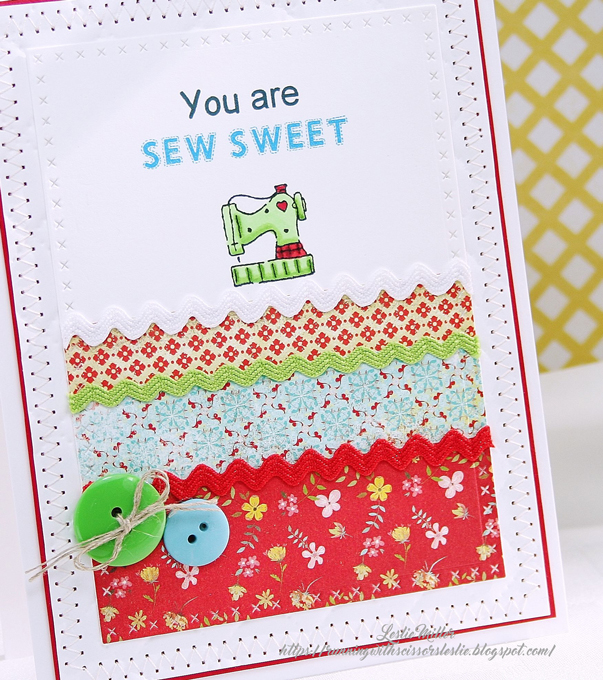 There are lots more samples from the Double D gals, so hop over there and have a look.  Hope you can join us.  Take care!

Email ThisBlogThis!Share to TwitterShare to FacebookShare to Pinterest
Labels: Copic colored, other stamps

There is so much to love here. I love the papers, the die cuts, the sewing machine, the buttons and lastly the stitching! As always I love your creativity!

OH MY STARS! This is AWESOME Leslie! LOVE your design with all the sewing related elements! So so creative! Great job!!

Beautiful! This is a perfect representation of Zig Zag, Ric Rac. Love the sewing machine and all of the trim details and stitching.

I love everything about this card, the colors, the design, the cute sewing machine...a fabric-lious card!! Thank you too for the nice message on my 'Nellie' post, it meant a lot to me...there are days (most) I can hardly stand having her gone!

Loving all of that stitching! This looks like a beautiful embroidered handkerchief! The Designer Papers are so precious! Just lovely!

Oh my, I just love this card. I love all the papers and rick-rack. Do you quilt?? The stitching on your cards is always so perfect. (I have corner envy!!)

Cute and sweet. I like the bright colors and the buttons are yes the perfect touch even if lumpy. ;-)

wonderful. I also have a bunch of ric-rac that I haven't used in eons... and a die I think... Have a great day

Wow! This is just beyond adorable! LOVE the ric rac combined with your beautiful papers! It looks like the real thing and I'm sure your friend will adore it! I'm like you & shy away from buttons too, but sometimes you just have to have them & yours are the perfect finishing touch!

Each time I see one of your cards with sewing, I am so impressed! It is such a beautiful accent. This card is simply darling!

What an adorable card you have created Leslie, fabulous use of rick rack ribbon with the gorgeous colorful papers, love the sewing machine image..
Hugs Pam x

Thanks for sharing this darling card! My daughter-in-law teaches sewing and is a costume designer and this would be perfect! Thanks so much for the inspiration!

This is such a sweet card. You do such an amazing job with your sewing on yor card. Love the cut die as well.

Love how you did it in a sewing theme card, love your ric rac with the different patterns of paper, such a great idea and love the sewing machine image, and to frame it all with the stitched die frame and then actually stitching was the perfect thing to top the card off, along with the cute buttons!

This is amazing Leslie, love your take on the theme and hugs, teamie.xx

Wow!! What a terrific creation this is ... How clever to go with a sewing theme and as always ... Sheer perfection!

Sew darling, Leslie:) Gosh, I must have some rick-rack in my sewing box. I guess I should move it to my stamping supplies!

If there was ever a card that cried out for cute buttons, it's this fun and colorful sewing card for your friend! She will love it, Leslie! I, too, love the look of buttons, but they do make a card hard to mail. All the other stitches and patterns and ric rac elements in your design are such fun!! Hugs, Darnell

Love love LOVE your ric rac and stitching, Leslie! I would not have thought of layering and using different colors like that. You are so clever when it comes to combining elements - always clean - but never CAS - and that stitching! Look how each corner matches the other perfectly PERFECTLY - how can anyone stitch oh-so-impeccably! LOL I especially like your bold red with the paler blue, and touch of green! You've created a quilt without making it quilty - lovely! xoxoxo

Leslie, this is the most darling sewing card, and I love the sweet sewing machine! Being a former quilter, I can hardly pass up seeing a card like this one! Such sweet "fabric" and stitching! I love it! Hugs and love, sweet friend! xoxo

Quite a delight for the eyes! Just love every stitch and every pattern!! Always picture perfect!

So adorable with all the layers of sewing, stitched frame, and "fabric" with the fun ric rac!! Love it all!

Oh my, love this card. Great take on challenge Leslie. Love all the ric rac trim, stitching and your complete layout. Your little image is adorable! Just an overall 'fun' card! A perfect card for your crafty seamstress friend! Love it!