It's Twofer Card Challenge time, friends!  We're doing Zoo Animals this time around and I have a feeling we're going to see some fun cards for this one.  I love critters! 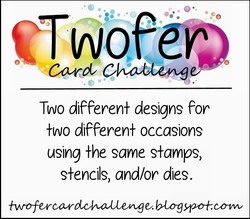 I could have gone with a dozen different stamps for this challenge, most of them cute stamps that would have made very cute cards.  However, I went with the oldest of the oldies for my two cards and made them both masculine.  Similar colors, but completely different designs.  The animals are from the Stampin' Up! set called In the Wild.  Remember that set?  I know... I really should update some of my stamps. 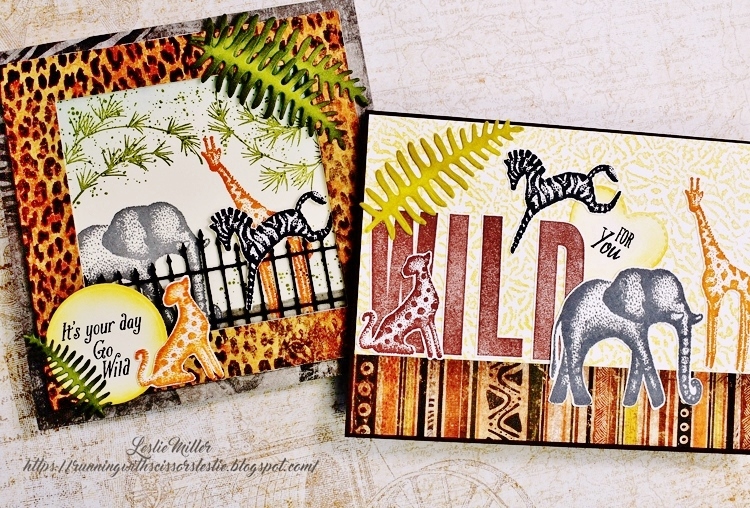 The first one is a birthday card for a guy friend.  Some miscellaneous dies and stamps helped out with the design.  I added a fence so it would resemble a zoo scene, not that all these animals would be in the same enclosure, but we can pretend.  The cheetah has already escaped and the zebra is on its way out as it jumps over the fence.  They're going wild per the sentiment. 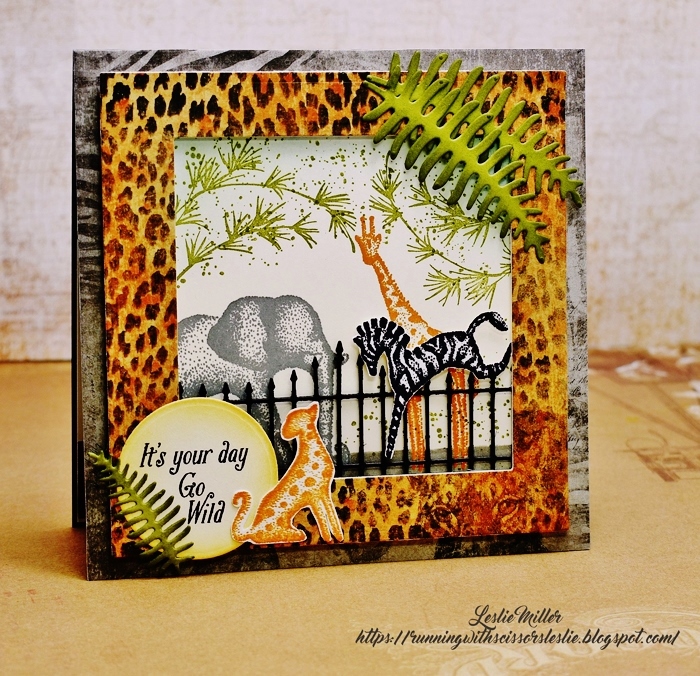 Next is a card that can be a simple love card, but I think it will be my husband's 2020 Valentine, or maybe anniversary.  Either way, it's a different occasion and a different layout per the challenge rules.  I really wanted to use this designer paper that I've had forever and have only used once.  I love it a lot, but just don't have the stamps for it.  Again, I should update some of my stamps.  The main background on this card is the retired SU! On Safari background stamp, and the "wild" is retired SU! Headline Alphabet set, stamped and hand cut. 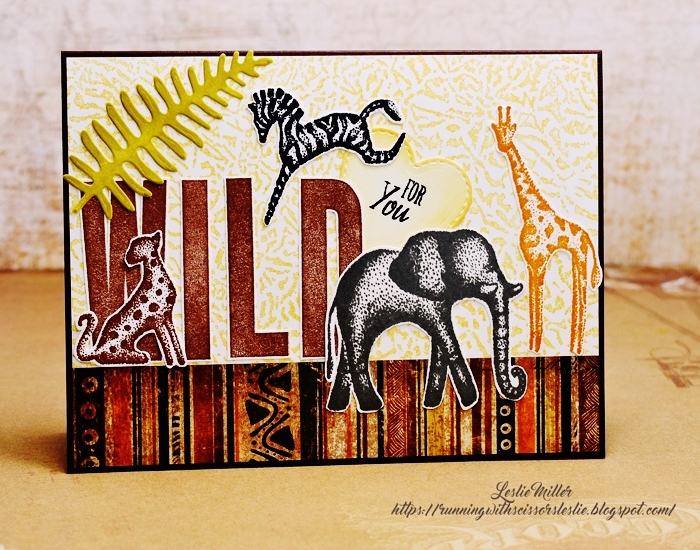 That's enough talk from me.  Hop over to the Twofer Blog to see some samples, including from our Guest Designer, Susan.  Have a happy day!

Email ThisBlogThis!Share to TwitterShare to FacebookShare to Pinterest
Labels: anniversary, birthday, masculine, other critters, Stampin' Up!, Whatever Wednesday

Oh my goodness you have aced this challenge! I love both your cards but something about the first one with the animal print frame and the fence just really makes me smile. The zebra and the elephant are so stinking cute and I love the die cut ferns. Adorable!

Oh Leslie!!! when I saw the prompt word for the Twofer Challenge #15 I must confess I was scratching my head as to how I was going to tackle this one but seeing these amazing cards so beautifully detailed, just gave me the inspiration I need to get in my craft room and start creating.
Love the amazing pattern papers, all the fabulous greenery and that sweet little fence on your first card, and your second card totally conveys the message of wild love, again with the gorgeous pattern papers you used.
You nailed this challenge my friend, thank you for the inspiration and I'll see you in the gallery.
Sending hugs.
Maria.

Both of these are fabulous! Makes me wish I had that stamping up set but I don't! Darn!! You totally nailed this challenge in the most fantastic way ever! Love, love that paper too! Wow!!

both are real cute. Love the cat skin border. Have a great day

Yay, the link worked! Your cards are like story book covers, Leslie! I think you are unsurpassed when it comes to scene building with beautiful pp and you have inspired me to think about mine more than I ever have! Your framed zoo is fabulous with its spot-on fence and escaping animals and your love note to hubby is manly, beautifully composed, and sexy! And I love the dimensional fern(s) you added to both! Hugs, Darnell

Love your zebra placement on both cards, Leslie!

Brenda in IN said...

Oh my Leslie, these are great! I love the scenes and those papers are perfect for this. I have all the Stampin' Up stamps I bought in the 90's so you are not alone.

Wonderful Twofers. I love all the great designs you added to each. The detailed layout scenes are fantastic and so well colored too.

OMG these are both amazing! You are SO creative! Hopefully once this show & wedding are over I'll be able to get back into joining in this fun challenge! Thanks for inspiration ... too cute!

Amazing cards! You are so good at these 'two-fer' challenges Leslie, I'm in awe! Love the fenced zoo card so much detail and well thought out, and the 2nd one is fabulous for your hubby! I have this set and it has been years since I pulled it out, kind of forgot about it actually!
The sentiments are so perfect on each as well. You nailed this challenge! TFS.

What great cards you made! Nothing like the oldie but goodie stamp sets! I love all tge great papers and colors! I'm sure Rich will love it! These would be nice for a scrapbook page for a day at the zoo! I'm trying to get going on a scrapbook for Jennifer.

when I first read I thought wow I wouldn't know what to do but these turned out so cool, I love the scene you have created in the first, love the way you framed it and great choice on the fence!
The second is a great one for your hubby, I wouldn't be able to put that on my blog my hubby would see it. Good thing you saved these papers and stamps they were perfect for this challenge!

Now these are ZOO cards, Leslie!! From the patterned paper, to the background SU stamp, and from the leaping zebra to that escaped cheetah, these are zoo-perfection. That paper on the bottom of your 'love' card is stunning. I can see why you've saved it! And I can't believe you fussy cut that 'wild' sentiment...I'm terrible at that! Fabulous cards, my friend! Bev

Fantastic cards Leslie. I LOVE the mix of patterned papers with the saturated colours. They compliment your beautiful images. Your first card lookslike it's framed with the zebra print framing and the thick leopard skin framing. Very cool. Love the accent of the ferns in the corner. Your second card is also amazing and what a fantastic love card for your hubby. Again, great mix of colours and patterns. Two real "WOW! cards! xx

Where do I even begin, Leslie! These cards are fabulous in so many ways! I love the papers on both of your cards and especially the eyes in the right bottom corner of the frame in your first card! That fence and the ferns really set the scene. The colors you chose on both cards is also wonderful and perfect for the artistic style of those images. Two great designs to show off classic images that will never go out of style!

I really like these wonderful designer papers with your animals! It's like I'm right in the midst of the jungle! LOL Very fun cards with a lot of animal elements and fun designs too!

These are "wild"ly fun!!! I remember that SU set, I love how you used it here!

Two wonderful jungle designs using this fun older set - I used to have it but it left my craft room in one of my purges! Great papers used here!

Oh my goodness, both of these cards are AMAZING Leslie!! I remember that SU! set and boy have you made it shine! The animals on both are beautifully stamped and your use of DSP on both is FABULOUS! Two absolutely delightful cards!! :0)

Hi, Leslie - your cards always MELT MY HEART - with Joy, Beauty, Love, Whimsy - I hesitate saying it again only because I may sound redundant, but it's true! I saw these the other day, and was smitten. How do you even think up the designs? I marvel at your imaginative use of characters and flowers. These are jaw-dropping GORGEOUS, amazingly colorful, fun AND full of Joy. Love both, and I wish to thank you for bringing such happiness to my heart. I've been to your blog several times the past 2 days, just to see your Afrikan theme! They are WONDERFUL! wishing you a joyful week-end. hugs, de

wow! These are both fabulous cards. You are so creative and really know how to put things together. Your recipients will love them.

I love your zoo cards, Leslie, especially with the zoo animals escaping (although I guess I wouldn't like it in my neighborhood). And a wonderful masculine Valentine or even and anniversary card!

What fun and fabulous cards!! I love the railings! What a super scene! The patterned paper on your second card fits perfectly with your terrific design!

Two wonderful cards, Leslie - you really made the most of this theme!! Just love all the jungle animals and the jungle paper - fabulous!!

You captured the sense of the jungle so beautifully with both fabulous scenes, Leslie ... the colours, texture and dimension on them are fantastic! Love the humour on the first, with the escaped cheetah and the making-a-leap-for-it zebra! The partly hidden heart peeking out from behind the letters and animals adds a subtle softness to your manly second design! Hugs, Anita :)

such bright and bold colors! i love how you use much older stamp sets and yet they look brand new. these are gorgeous!

Wonderfully 'WILD' cards!! Both designs are super creative and FUN!! I can see why you kept this stamp set, so hang on to it, I let go of over a few hundred of my SU sets and now wish I hadn't!! I love this challenge but have to admit I am not good at it, so it's fabulous seeing what your team does..love it!

How fun! The animals, the colors, the paper....perfect for this "animal" set of cards.

Woah, both of these cards are amazing! The images are so fun, whether wild or captive. Such wonderful scenes you've come up with~