Hello on a Monday, friends!  Yippee skippee, I got some cards made in time for the November Twofer Challenge.  Two different designs for two different occasions using the same stamps, stencils, and/or dies.  The prompt this month is "Wreath".  We're supposed to photograph the two cards together for the link up, so I've done that first. 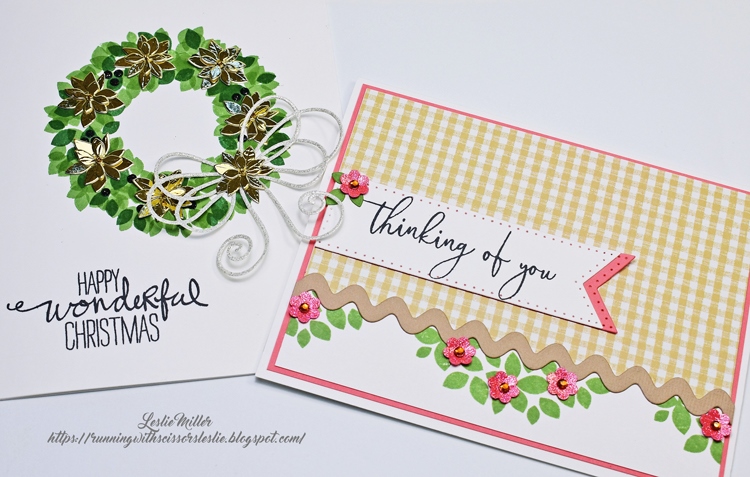 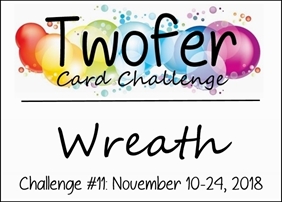 Thinking I could make some quick cards with no coloring, SU's Wondrous Wreath was the first stamp set to pop into my head.  I made the Christmas card first, stamping and turning and stamping multiple times, but still had some blank spots due to a flawed stamp that SU did not want to replace (grrrr), so filled in with die cut Poinsettias and a bow.  Lots of stamping, die cutting, gluing, applying Stickles.  A clean and simple and not so quick card.  Ultimately, I like how it turned out. 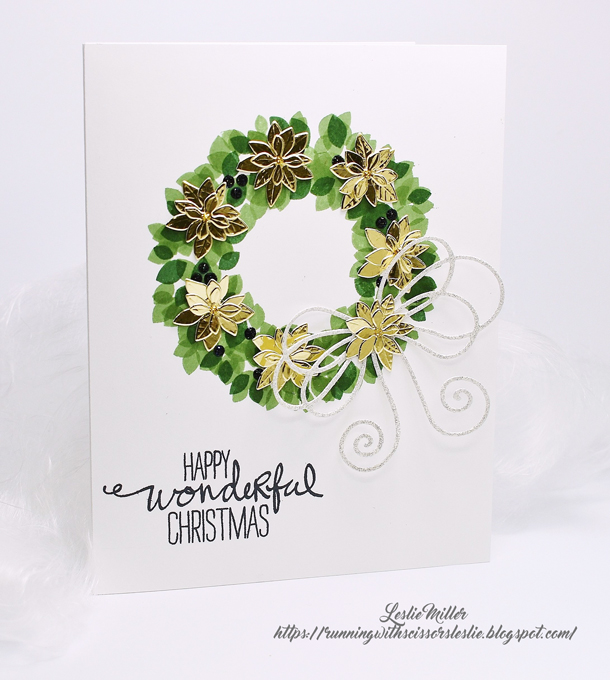 The second card was much quicker.  I used only one stamp from the multi-stamp set, whereas I used three on the first card.  Gee, I hope that's okay for the challenge.  It's the same stamp, two different ways, right?   In this case, the flawed part of the stamp is under the gingham designer paper, and I stamped it three times in a row, somewhat like a garland.  Added little flowers punched from glitter paper.  Rhinestone centers.  The flower on the sentiment has die cut leaves. 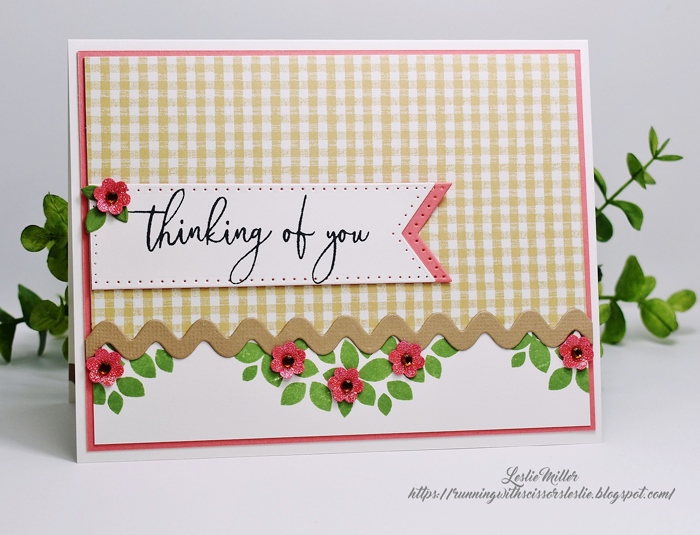 Honestly, if it wasn't for the Twofer Challenge I may not have ever used this wreath again, but now I love it to pieces because of that sweet garland.  You just never know.

Supplies listed below.  Have a happy day!

Email ThisBlogThis!Share to TwitterShare to FacebookShare to Pinterest
Labels: botanical, Christmas, clean & simple, flower cards, Stampin' Up!, Your Next Stamp

Both of these are awesome! It has been years since I've seen a stamping up catalog but now, I may have to see if we have a dealer here in Lincoln ! Love that wreath stamp!! Your filling in of the gaps was gorgeous! I'm glad you had to do that as it made the card even better!

What terrific cards and so clever how you used that wreath on the second card! The stamping on your first card is so beautiful and I thought they were vellum leaves at first...

Wow! both are fabulous in their own way, but I really do love the wreath. It's just awesome. Maybe good that SU wouldn't replace the stamp so you could create this magnificent card. Happy Thanksgiving!

Your twofer is amazing, Leslie! I love how diverse our stamps can be, and your expert applications are always so inspirational! Love them both! hugs, de

Your fine, Leslie, as long as the one same stamp you used is the wreath, which it appears to me it is. I love that you turned it into a garland under the gingham on your second card! Very clever and really pretty! The punched glittery flowers, ric rac border, and stitched banner finish it off perfectly! But your Christmas wreath is worth all the work you had to put into it! It just pops off the card against all that white! I love the gold with that green and that bow is everything!! Thank you so much for playing in Twofer Card Challenge #11! Hugs, Darnell

I have never seen this SU wreath looking so beautiful. I love how you added the die cut flowers and beautiful die cut bow. You are right..a CAS card, but not a QCAS design, but so well worth your time:-)

Your 2nd card with the pretty garland and sweet gingham is so beautiful too. So happy you were able to cover up the one stamped leaf that does not stamp properly. Sorry that SU would not help you out....

Hugs and Happy Thanksgiving, my friend.

What beauties these are. I love the wreath design and even more I love how you made that wreath design into an edging along the bottom which looks so awesome with the rest of the card. You certainly thought outside the box with these. They are fantastic.

A delightful duo, Leslie! That Christmas wreath turned out to make a gorgeous Christmas card, in spite of the flaw (which I can't find whatsoever)! Those gold poinsettias are sweet, and that bow tops it off perfectly. And I've fallen for your second card hard! The garland peeking out from under the ric-rac and that pretty gingham is delightful and a great way to use this stamp two different ways! Thank you for joining us at the Twofer Challenge. Bev

Two beautiful designs, Leslie. Love the rick rack and the pretty wreath with the gold accents.

Oh I love when you do these 'twofer' card challenges. Both cards are gorgeous. The gold poinsettia's really take the wreath to the 'wow' factor, just beautiful. I would of never thought your second card was made with the wreath if you had not mentions it. Love your design on this, with the ric-rac, gingham paper, fish tale banner and those cute little flower clusters, so pretty. So happy to see your post today Leslie, love when you create!

Two stunning cards and most beautiful wreath and colours. So pretty is the ric rac and papers ....stunning.xx

both are lovely.I would never have thought they're from the same set, but then I looked more closely. Creative. Love the die cut. Have a great day

I love that set too..never thought about a garland..what a great idea...your cards are so pretty! VERY creative!

So wonderfully done, Leslie. You sure made me look for the "wreath" on the second card! :) That stinks that SU! wouldn't replace the defective stamp!

Aren't you ever so creative, you did a wonderful job covering up the mistake in the stamp, I love the different tones of green in the wreath, I just love the addition of your sweet flowers with both, Love how you made two totally different style of cards, neat layering on the banners and like the ric rac used on the second card too,
Fantastic creations!

What a gorgeous, rich Christmas wreath, Leslie ... the layered stamping creates such wonderful depth ... and those gold poinsettia and the flourishy, shimmery bow add a wonderful sense of luxury to it! Your thinking of you card is so pretty ... those sweet garlands with their sparkly blooms put me in mind of spring blossoms ... lovely! Thanks so much for playing along with us at Twofer! Hugs, Anita :)

Yippee, Skippee indeed, Leslie! These two cards are just gorgeous! I'm crazy about your color choices and your fab designs. So glad you played along with the Twofer Wreath Challenge. :)

Such great cards! As you know, I have troube with the wreath as well, but with your poinsettias it looks fantastic! I don't know how the sentiment can stamp so well and not the wreath! And I also love ric rak on cards. Your thinking of you card is so pretty with it and the wreath used as garland!

Two stunning cards and so very different and the most perfect 'twofers'!! Such a pretty stamp, too bad they didn't replace it for you, but you certainly made good use of it! I had a stamp from SNS that when it was cut the last letter of the sentiment was snipped off and they immediately sent me a new one...now that is customer satisfaction!! Have a wonderful Thanksgiving!!

Leslie, I don’t have that wreath set...I know there is a company now who sells templates just for these wreath parts...but you don’t need one of those! You’ve made a fresh and clean wreath so so pretty with the gold flowers and bow! I just may have to copy this idea. And I adore the spring mix you’ve given the second one. Love visiting here. Happy Thanksgiving Stamping friend!

You are so smart. First to figure out how to fix a flaw. (Really? What kind of customer service is that? Especially with someone with your followings).
Using the stamp as a swag is second genous move and I love the pink.
Two fabulous cards!

Oh Leslie, what an amazing pair of Twofer cards, so completely different but equally gorgeous.
Love the gold flowers on your Christmas Wreath, the delicate border on your twofer card is a struck of genus.
Awesome and beautiful.
XO
Maria.

Very creative with the wreath on the second one and the gold is wonderful on the first. I have yet to get into this challenge but I always intend to. Seems like a great idea with stamps.