It has been my goal to save Fridays for flowers and Mondays for cute cards, but I'm pulling a switcheroo this week -- a cute card today, and then I'll pop in with flowers on Monday.

I'm in possession of a fantastic number of new-to-me Stamping Bellas.  I haven't counted, but let's just say my friend is very generous with her time and resources.  I've used two of them on my card today:  Christmas Penguins and Rita and the Reindeer.  I had colored both and then it occurred to me that I could put them together, as though the reindeer is leading the penguins with their string of jingle bells. 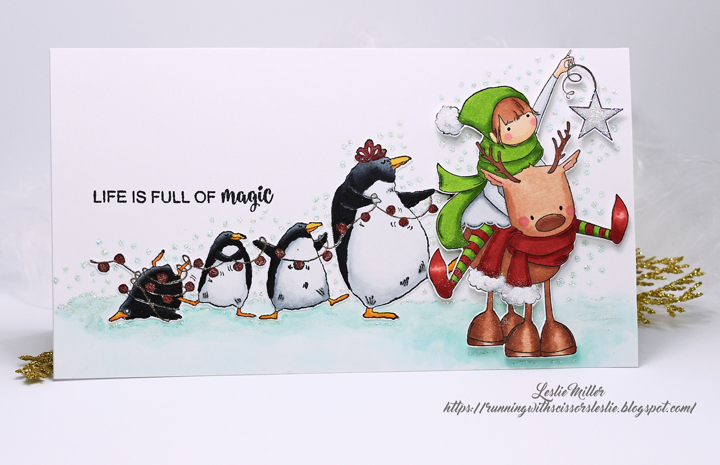 There's much more sparkle on this card than you can see in the photos: 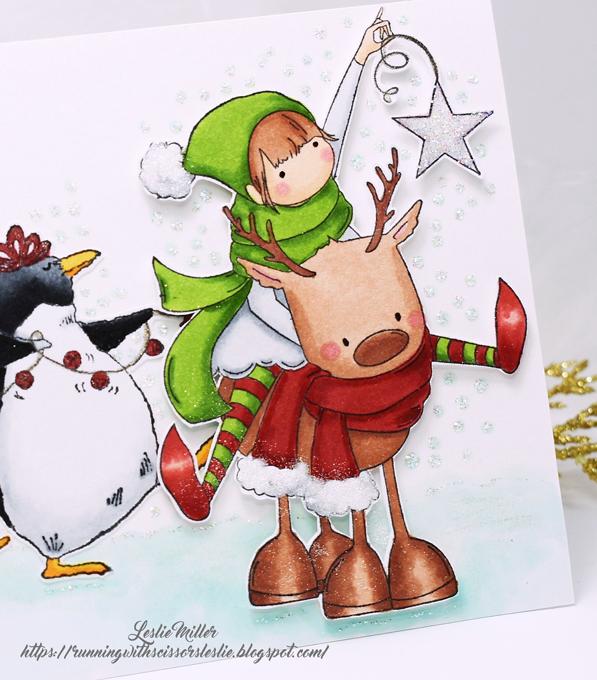 The sentiment is from a Poppystamps set called Believe in Magic.  The folded card measures 6 3/4" x 3 3/4".  I think I've covered everything except to say this is probably my most fun Christmas card so far this year.  I still have a lot of Bellas to color yet, so we'll see if its position is usurped later.

Nothing like a little line of dancing penguins to make my heart smile and what an adorable reindeer leading the pack! Well done you!

OH MY GOODNESS Leslie, I love this card today. Designed beautifully, I love that you popped up the reindeer to lead the penguin pack! These cute penguins just melt my heart. And all the glitter - wonderful. The trim on the hat and scarf look 3d'ish, so cool. I keep scrolling up to look at this again and again. I'm in awe. Just Love it!
I think I would have to agree with you about this being the most fun Christmas card this year you have created! Looking forward to more Stamping Bella cards in the future! You made me smile today, a great way to start my day. Thanks for sharing, enjoy your weekend! Hugs,

Well, if this isn't just the cutest Christmas card ever!! Both stamps are super adorable and to combine them is genius!!! I had to laugh at your fussy cutting statement, but it was well worth it as they are so adorable!!! Geez, I can't wait to see more of the 'Bellas'...I have a few in my collection but not as cute as these!! We are headed out of town for the weekend for a much needed break, but I will 'check in' when I get back to see whats new...have a wonderful weekend (Mack is going with us too)!

Omg! I never would have thought of putting them together, but now I see they were meant to be that way! This is the cutest Xmas card I've ever seen! It's a triple wow!!! And your coloring is spectacular!

I love these little guys they're so cute :)

So clever of you to use them together. It resulted in a very cute and fun card design. I love both images too.

I'm not a cutesie type of person, but this is adorable. Have a great day

This Gorgeous and so festive and fun card must have taken you hours to color and fussy cut, my friend. You should frame and use for a Christmas decoration in your home. So adorable and special, Leslie. TFS Hugs, Nancy

Gosh, Leslie, I love "business size" cards, and this one is as far away from commercial business as possible - and definitely all about the business of Christmas! Such a cute line dance, I almost hear the song, "put your left foot in, put your left foot out..." LOL only with Christmas bells! LOL BEAUTIFULLY colored, and so fabulously sweet. Look at Rudolph's shiny little feet and the dangling magical star! Love everything in your creation, and can just imagine your smile as you colored these deer critters! hugs, de

Magical! Cute! Festive! Fun! Filled with jingles and sparkles and stripes! I love it!

Yes, I agree with you this is a fun card!! So cute with all the fun characters. And what a graet job fussy cutting! I will do anything if I can avoid it - but sometimes we must! Have a great weekend!

Perfect card. Rita really looks like she was meant to lead those penguins. Your coloring is always so perfect - just like your fussy cutting. You really have patience!

Oh WOW this is fabulous-the two images were made to go together love the penguins with the string of jingle bells lol great colouring and love all the sparkle definitely magic!!!
Carol x

Oh Leslie this just put a smile on my face, aren't you ever lucky to have received these stamps, I love how you combined the two, terrific job on cutting them out and coloring of them too! Love all the sparkle you have added!

So cute, Leslie! And I do see the sparkle. You do cute as wonderfully as you color florals - seriously. And you got me laughing when I read about the amount of time you spent "thinking about" fussy cutting. Boy, don't I know that feeling! Your coloring no matter the medium is excellent and I loved your idea of Rita and the Reindeer leading those cute penguins - it looks like a Christmas conga line *laughing* and sure made me smile this evening.

oh I laughed out loud at the time spent trying to avoid fussy cutting! Truth! I love this darling Rita and you're so lucky to have her in your possession! I need to put her in the cart somewhere! lol Your card is adorable! I love it!

Another of your stunning cards Leslie, wonderful image and amazing colouring!.
Pam x

I do love sparkle, Leslie, and this has so much of the glittery stuff! :) As always, I am amazed by your coloring, and your fabulous cutting. Oh my!

You crack me up with your switcharoo. I don't plan and lucky if I get the words posted lately. Anyways... your little switch works since this is ADORABLE!!! The sparkle snowdrops are darling and fun fun image!

Oh my friend, I'm late in coming here, Saturday was busy for us, we went to Terra Haute,IN. for the wedding of the daughter of one of my hubby's coworkers and friend, we had fun, I even venture into dancing a little, LOL!!
Anyway, your card is amazing Leslie, I love the fun line of penguins marching along and dragging that last one all tangled up on the jingle bells.
And your reindeer with Rita on his back is over the top adorable.
You are the Fussy Cut Queen my friend, WOW!!
XO
Maria.

I love how you have combined the images to make one spectacular card!

Girl, it is the most fun Christmas card in ALL of Blogland so far this year!! Can this be the book cover, if I write the book?! So beautifully colored and so.much.fun!! Hugs, Darnell

This is the cutest and sweetest Christmas card, Leslie!! And oh what fun to be bequeathed new stamps! Just adorable!

Fun and totally fabulous!! Oh my, who needs a gift when you make such beauties! I love how you put this together not to mention your copic skills!

You're rocking it, girl!