How about something cheerful and springy today?  I sent this card to a friend whose fluffy black cat likes to sit in a sunny window and watch the goings on outside.  This cat is looking in the wrong direction, though, hmmm...  Maybe there's a window on the other side of the room? 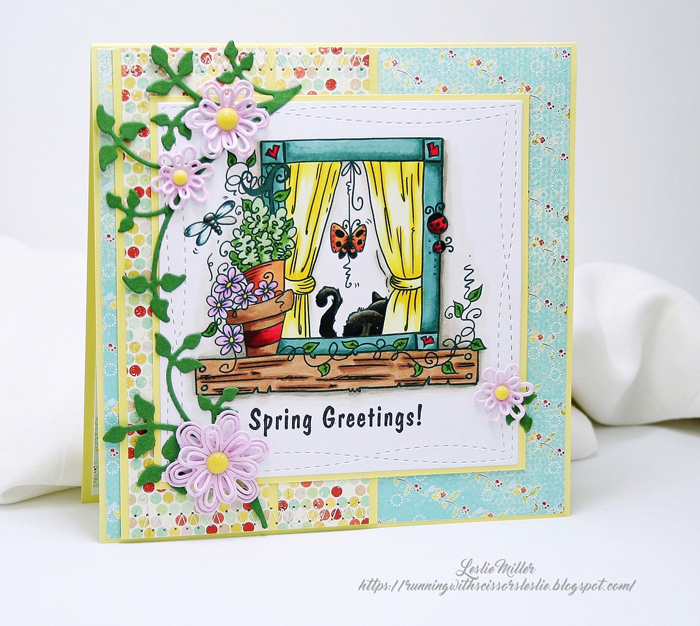 The image is Bugaboo's Spring Window digi, colored with Copics.  I had a hankerin' to play with papers and dies, so I dressed it up a bit.  I haven't bought a shred of designer paper since I organized my paper cabinet, so it's all growing old, but that's okay by me.  It's a first time use for the image and the leafy die.  The Die-namites leaf die was a heck-of-a-deal close-out bargain which I thought would be useful and versatile.  I split it into two pieces here, plus used one little leaf cluster for the small flower on the opposite side.

The flowers are Sue Wilson String Flowers with enamel dot centers.  The sentiment is an ancient one from my collection.  I'll sum it all up in the recipe down below.

Glad you stopped by!  Have a happy day!

Your card does remind me of Spring and it has finally come to East Tennessee. Love your choice of papers and think it is wonderful you are using products you have on hand. I have papers from long ago that have never been touched. Loving those cute flowers and the image is adorable. Once again you have blown me away!

Yes, a very cheery spring card. It makes me smile. Mark (our son) also has a black cat with a bit of white, which sits in the window constantly as well. Great choice in papers. Papers never get old - I still have some of this MB paper as well. You know I find Bugaboo images sometimes hard to colour, but you always make them look so easy to do. Love your wonky stitched square, your layout and the vine and flowers. Those flowers are so sweet! Wishing you a happy day as well! (off to work I go - Ugh!!)

Yes, yes, Springy and cheerful is good, we have rain for the next 6 days! What a cute, cute image, I bet that kitty turned his head when he heard the fridge open (ask me how I know...lol)! The colors are so pretty and the paper is very pretty, too (feels good to use it doesn't it?), and of course you know I too love Bugaboo images! Have a great day!!

Hi, Leslie! Love your "mellow yellow" theme, and the glorious sprint-time freshness in your card! How creative to stitch the top and bottom of one of the pretty DPs for that special texture, and to place the colors side by side - do you choose your papers before coloring? Or is it sometimes yes and sometimes no? I always forget to choose my papers first. DUH! I think Kitty has found something far more interesting to pounce on, like maybe someone's foot? Or perhaps a hidden puppy? LOL

The BG image is DARLING! I don't recall seeing it, and it's fantastic - I wonder if she has a window of each season? It's a card that is sure to warm your friend's heart. We have a black kitty as well, but she is a short hair.

Wishing you a beautiful day - one that is just as lovely as your dear, thoughtful heart! love, de

OMG what a cute image and of course your coloring is fabulous! LOVE your choice of papers for your design! Such wonderful springtime goodness! Hope you have a FABULOUS weekend ahead. Supposed to rain here for the next 4 days but I'll be inside at the stamping convention so it can rain all it wants! lol Won't impact my spending even a little bit! lol

I wish we could still get this 'old' paper! Memory Box had some of the best patterns! Fabulous card and coloring Leslie! love it!

Oh, Leslie, what a darling card, and I LOVE the DP with your great layout and stitching! Sweet! And my guess (hehe) is that the kitty is watching momma stamp! Ya think? Given all the cats I see on Instagram and blogs, I think that may be true. Hehe! Truly, I love it and love your great coloring! And what a wonderful leaf die that is. Hugs!

I still have these papers in my stash Leslie! love them so will stop there for a while.
love your cute kitty image, surrounded with flowers, lady bugs and butterfly, wonderful spring colours and of course gorgeous MB papers.
Hugs Pam x

You're right - it is a cheerful card! Maybe the cat sees a mouse!! I love the paper combination as well! Have a great weekend!

Oh this is so happy and cheerful! I just love all the colours and the details ... Those flowers are so cute! And this could be my cat! Beautifully done Leslie!

I am in love with everything about this card! It is now on display for everyone who comes to see it too! I'm so thrilled that out of all your cat friends, it came to my house! It looks just like Brady too! The papers are gorgeous, the coloring devine and the flowers awesome! Total perfection! I adore it!!

I love it, Leslie. Cute image, wonderful die-cut flowers, and a great die-cut frame. Way to keep using your papers, too! :)

What a sweet card! I love your coloring and the flowers are so cute:)

Awww too cute, terrific coloring, especially of the cat, your vine die leaves go great with your image and I so Love the flowers! I bet your friend was thrilled with this sweet creation!!

I love this cheerful, whimsical and sweet look at summer. What better place to spend the day then gazing out into the garden?! Love it, Leslie!

So fresh and summer like with the colors Leslie. This made me smile and want to go outside. :-) Darling sprigs and flowers!

I know someone with a black cat! Recipient with be thrilled. Love the layout!