It's a Bunny, but not an Easter Card

Hi, friends!  Easter is over, but I've still got bunnies on my mind.  I continue slowly through my not yet used stamps and dies.  There's one of each on this card. -- Inkadinkado Bunny Retreat stamp and Memory Box Palma Curve die.  I fell in love with each and just had to have them.  I really need to stop looking! 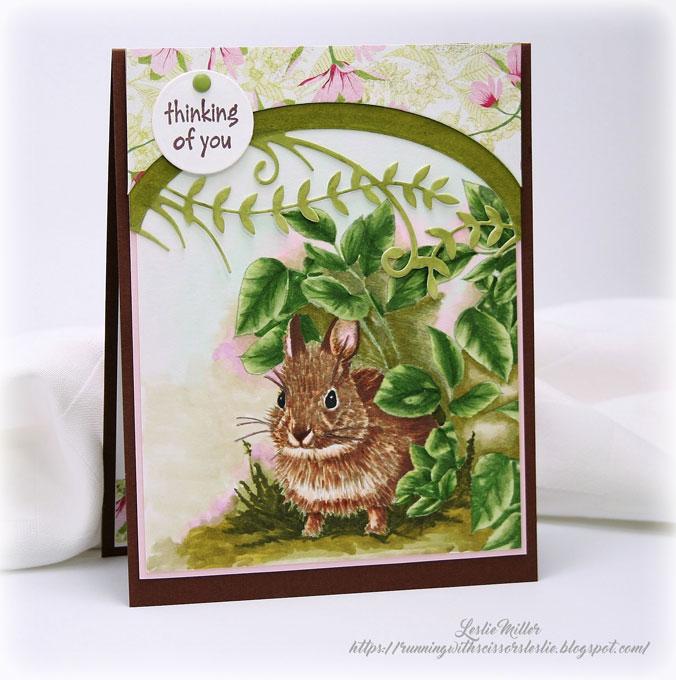 The bunny was colored with a million flicks of several brown Copic markers, trying to make him look fuzzy.  Took forever!  The leaves were easier, though.  By the time I got to the grounding I was ready to be done and just sort of scribbled it, tsk tsk.

Since there was nothing but green and brown in the colored image I added some pink.  I've got to use up some of that cabinet full of designer paper.  Such a small smidgen here, but at least it's something.  The card became instantly prettier with the paper!

Well, that was fun, even if it did take too long.  Onward now to the next not yet used whatnot!  Supplies are listed below.  Thanks for stopping by, and have a happy day!

OMG!!! You coloured this??? It's amazing! I'd definitely frame this... But then I could frame all your cards... I love this design and the dies you used too ... You have a knack of putting just the right thing in the right place and always create a masterpiece!

Oh girl, this is gorgeous! Your coloring skills are off the charts. I also love the way the image is framed. Well done you!

Yes, this is amazing- I agree with Ros! I can actually see the million flicks of copic strokes on your bunny - he/she looks so real! WOW!. Love the MB Palma curve die, don't think I have ever seen this, but it works very well with your scene. And the bit of pink in your paper and background, just finishes this off perfectly. Stunning card Leslie, I"m so glad you shared this today. Looking forward to your next creation, as you always inspire me in so many ways! Enjoy the weekend.

ohhhh, Leslie! My heart is brimming with love and happiness at the beauty and sweetness of your masterpiece! I can only imagine the dearness of each flick of your wrist with the bunny fur. INCREDIBLE - truly. When you photo first popped up, I sighed with peaceful contentment, and then said to my, "WAIT! that looks SO familiar!" A quick look to my right at the stamp tower a yard away, and there sits the same image. I DID use it ONCE and it looked terrible, so I never used it on a card - I think that does not count for using the stamp LOL

But now I'm inspired. I had used black (according to the staz-on stained rubber), and how foolish was that? Next I tried Versamark and chalked the image - UGLY! Taking a cue from you, I will strive to be more patient with these types of art stamps, and use lighter color Memento ink and color on top. I think I'm afraid of not doing it well enough, so I don't even try. Perhaps admitting that openly and honestly will help me overcome the fear?

The other pretty aspects are:

the touches of pink in the designer paper with low hanging flowers, and the hints of it throughout the background.

and the "scribbled" ground. Wish I could scribble that well! LOL

This is probably one of my favorite cards ever on your blog, and that is saying I lot, as you know, I'm quite the Leslie fan. I'm actually printing your card out to put next to my stamp to enjoy gazing at it often, and to have an idea for some of these detailed Inkadinkadoo images.

Thank you for the inspiration today, Leslie, and for sharing the gift of your soul through art! xoxoxox

OMG Leslie...your million flicks with your Copics made your bunny so real!! The results were so worth the effort. I love how your bunny is peaking out from under all the foliage, your beautiful design, colors and pretty DSP. TFS my friend. Hugs...

I totally believe you've got a million flicks on this card - it's amazing. You are truly incredible, Leslie. I love everything about this. Good job with using up some more patterned paper, too:)

cute card. the flicks were worth it. He looks really cute. Have a great day

Wow, Leslie! I though that the bunny was a piece of Webster's designer paper! What a work of art! The coloring is masterful! I am in total awe!

Omg! I thought this was a photo when I first looked at it! Your coloring is so incredible it just looks like the actual thing! I have NEVER colored a bunny that looked even 1/10 as good as this! And your leaves are just as awesome! I'm loving that die too! Another one for my wish list! This is truly a "WOW" card!

Well Leslie! not much left for me to say!! it`s all been said already...Stunning masterpiece, how you`ll part with this amazing card I`ll never know! should be framed..
Hugs Pam x

That rabbit looks real. Other card deserving a frame.

Leslie, for my birthday, our daughter gave me a hand drawn portrait of our golden retriever, Beulah by a young artist. Looking at her Instagram photos, I was able to see her pencil drawing in progress. It was a million flicks of charcoal pencils and shadings, and so very realistic! That's what this bunny reminds me of...you made a beautiful card, so much detail and love the arched diecut...just amazing!

OMG!! That little bunny is so cute - he looks like it could just hop right out of the paper! He looks so real! You did such a wonderful job in coloring him! It must have taken a while but it was definately worth it!

wow this is special. so beautifully done. you've got talent!!!

WOWZA! This is absolutely gorgeous!!! You must have the patience of a saint to color that bunny so perfectly! Your time was not in vein ... it's perfectly awesome! I love the overall scene ... just amazingly beautiful Leslie! You are SO talented! Thanks for inspiration ... hope you're having a fabulous weekend!

Oh my goodness, Leslie. Your coloring of the sweet bunny is incredible!!! You have such dedication to perfection. And the little touch of patterned paper looks just right. Love it!

Whoa! Love your amazing no-line coloring on this beauty! The design is exceptional as well. You find the best dies! Love that curve!

What a beautiful bunny (and piece of art), you are so talented with your coloring, something I will never be and this is an incredible card, once again would make a cute little framing! And WHERE are my manners?? Thank you so much for that gorgeous Easter card you sent me, wow, I was so pleased to get happy mail, and I set it on a shelf in the kitchen with some other Easter things, so every time I walked by I could enjoy it, a very pleasant surprise...thank you!!

Wow! This is stunning! What a fabulous job with all the flicks on the bunny. You must have a very steady hand and a keen eye. Gorgeous scene and I love that paper. It was just the right touch.

Try and beet that! OMG and all the other stuff that I'm thinking! This is about my 10th time visiting this card. Frame it or send it to me! :)

Oh my goodness Leslie you just keep out doing yourself all the time, this is just beyond amazing, you need to let Inkadinkado see this, they would just be breathless with what you have done with their stamp, I totally Love everything you have done, that bunny looks so real as does the foliage and what you have done with the ground may have been just scribbling but it is totally perfect, great touch with the paper and die too, it is just a fabulous card all around, so Awesome!!!

Oh my goodness... the fur might of taken you forever but it looks AWESOME! Fabulous job with the flecking in different shades, really adds depth. These leaves are so rich in color, they look real. Beautiful card Leslie.

WOW! I agree this Lisa that you blew me away with this rabbit and your million flicks of the markers. It was SO worth it all! This is exquisite, and you've brought this precious rabbit to life! I LOVE it and love your frame! Stunning card! Hugs!