Never Regret Anything that Made You Smile

Words to live by on one of the anniversary cards I made for the 20 card order I've mentioned a time or two recently.  This one is all die cuts and designer paper with the focus on the sentiment. 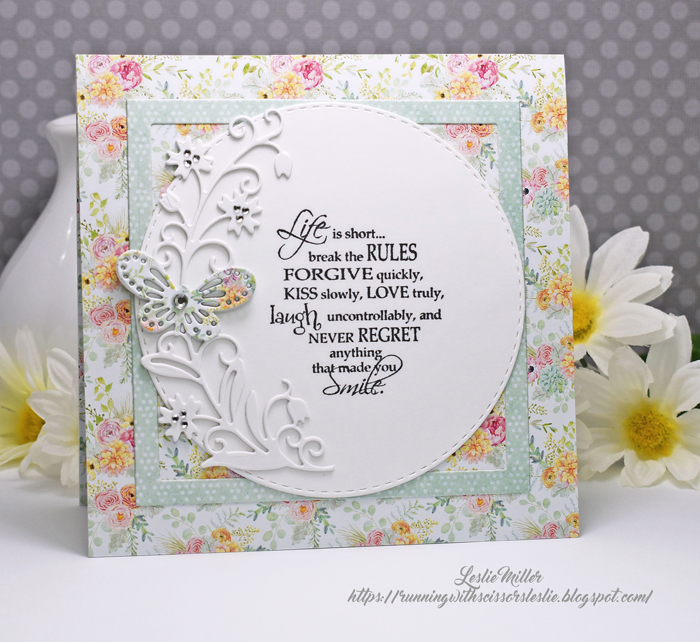 The stamp is from Rubbernecker, called "Never Regret".  I like it for an anniversary, but it could also be used for wedding or birthday.   Have you looked at Rubbernecker Stamps?  Best place for sentiments, I think, but lots of other great stuff, too.  Just sayin', not sellin'.  You can never have too many sentiment stamps.

Pretty Mintay "Lovely Day" designer paper and Tutti Designs Butterfly Oval are the primary supporting elements.  I cut the Butterfly Oval in half and used it as a sweeping edge on the large circle.  The other half was used on a card I'll share later.  The die is layered for dimension and then just the butterfly area cut again from the Mintay paper, trimmed and glued on top.  Rhinestones added. 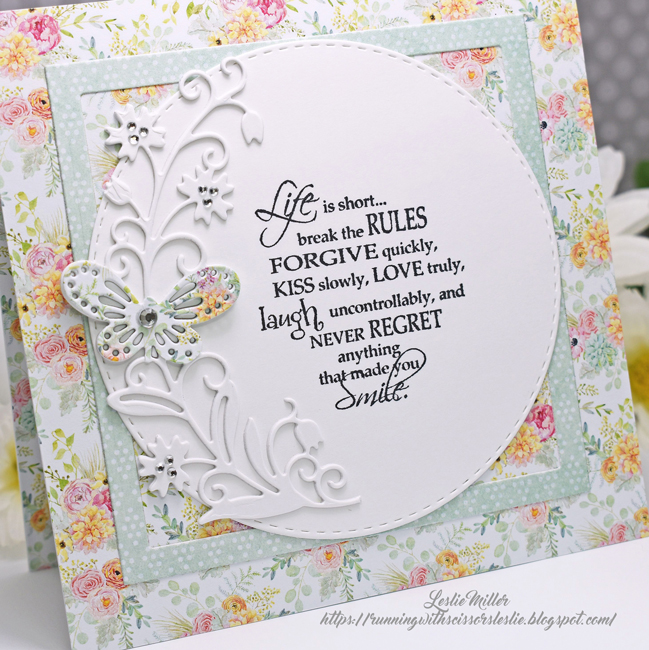 Oh girl, this card just speaks to me! I love, love, love the sentiment! The background paper is glorious and those daisy flowers you used to set up the card are my favorites! So this card is a huge hit with me...can you tell? Have a lovely rest of the week!

You make me want to pull out some pretty patterned paper! Love this card Leslie!That die is so beautiful and the sentiment so true!

This is gorgeous, Leslie! Love that sentiment! It could be one of my favorites of all time! Great words to live by! You always inspire me!

Wow, beautiful use of those Mintay papers and dies!! I find it hard to use the papers as I don't want to cover them up, let alone I hoard them lol!! I have an upcoming DRU card next month usin them though, and a frame and a butterfly..well papers are the other company 'Piatek'....you have to see the new Mintay papers at FS...mine arrived last week, and you will love the 'kiddie' one!! Sorry to rattle on...Happy Valentines Day!!

Such beautiful papers and such a lovely sentiment. I do have a couple Rubbernecker stamps, but not many. Happy Valentine's Day to you, Leslie!

beautiful and so is the sentiment. Have a great day

Gorgeous floral DSP for your background, Leslie. Love your die cut floral image and butterfly too. But your beautiful sentiment really caught my attention 1st. A wonderful thought to live by...TFS your beauty, my friend. I agree, I was thinking this rainy day was perfect for spending time in my craft room:-) Love and Hugs...and Happy Valentine's Day.

This card is so very gorgeous. I love the sentiment too.

WOW!! Leslie, that sentiment is absolutely amazing, each word so true and so beautiful, and what a gorgeous way to frame it, the die and the pattern papers do the job perfectly.
This card is a stunner.
Thank you for sharing it.
XO
Maria.

Leslie, the way you use the Mintay papers is always breathtakingly pretty. Even your little butterfly is floral! Beautifully done, with those tiny rhinestones, and lovely sentiment. I especially like the square frame behind your circle - great design idea which I'll be casing for sure - but ----- it DOES remind me of me sometimes -- trying to fit a round peg into a square hole. LOL It's lovely and endearing, my NorthWest friend! hugs, de

BEAUTIFUL! I just used this same paper on a 70th birthday card lol. Love how you've used only half of the butterfly oval die cut ... great thinking. Gorgeous card ... she's going to love it!

This is absolutely gorgeous! Amazingly gorgeous! The sentiment is beautiful and the papers you've used are so special.

One word says it all -- 'STUNNING'!! Leslie, this is just so amazing, your beautiful Mintay papers, the sentiment is so beautiful, and how you added the Tutti butterfly die cut. I have this die and never thought to cut it in half and use it this way - thank you for the idea. Thank you for inspiring me once again. Okay, off to scroll back up to look at this again - (big sigh)!! Looking forward to seeing more when time permits. Happy Valentine's Day to you as well. Take care,

Leslie, that's one great sentiment stamp and love the frame with the mix of DP and die cuts :)

Beautiful, I do love that sentiment and I love how you cut the butterfly out of that paper, such a soft and subtle touch but just the right amount of attention brought to it, great way to frame the sentiment!!

Many is that pretty paper Leslie! It is romantic and the scale is really nice too, perfect for the butterfly!

Beautifully soft, delicate and feminine card Leslie. Gorgeous layout and deisgn and beautiful mix of gorgeous papers. Love the sentiment and love how you have the butterfly flourish nestling up to it to bring focus. xx

This is so beautiful it made me tear up

This card is so pretty - and you are right, I love the sentiment. It is just perfect for your card! The paper is so pretty. It all goes so well together with the dies as well. I hope you are having a good weekend.

Wonderful words wrapped up so beautifully in this stunning card Leslie!

Very pretty indeed. This makes for a quick card with the die cuts and no coloring. The tiny jewels are a great touch on the die cut and I like the layered frame look with the larger circle over it. Great card for the order you had. ;-)

This is so you, Leslie! Full of garden life, butterflies, and words to live by! You're brilliant to cut that oval in half as a spray! Now I've ordered it, too, just like I order that pretty paper from Our Daily Bread! I wonder how many women order something every time you post, lol! You didn't know you had such power, did you?! Hugs, Darnell

Beautiful! That sentiment is awesome, and I really love the font too.