Double D Challenge: The Moon and the Stars

It's the third Wednesday of the month and that means it's time to pop in with another Double D challenge.  This time we're doing The Moon and the Stars.  Well, that worked out just fine for me because I had a not-yet-used stamp that fit the mood board perfectly. 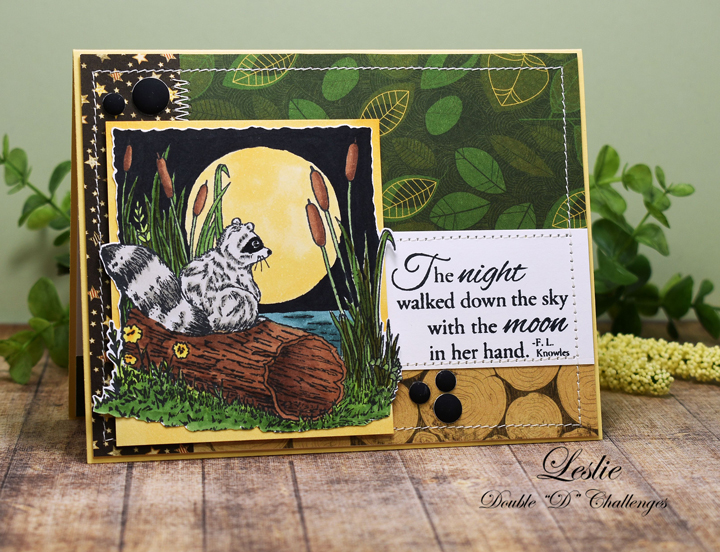 Check out the mood board -- lower left with the moon hanging over the water.  Reminds me of camping, sigh... wish I was there. 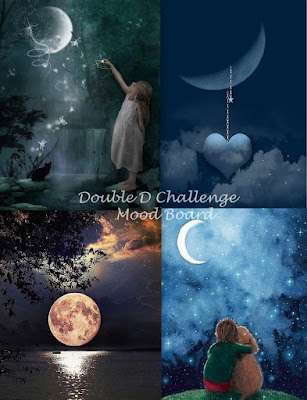 Creative winners are voted on by the team, plus there's a random prize.  This Filigree Moon die set will make some mighty pretty cards: 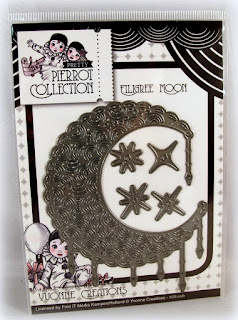 The sentiments/quotes in this set are what caused it to jump into my basket.  I've used them on other cards, but first time for the raccoon in the moonlight scene.  Now that I've colored it, I think it's pretty cute.  My card is rather masculine in appearance, yet if the look of it appeals to me, would it not appeal to another female, as well?  I hope so because it will probably go to a girlfriend. 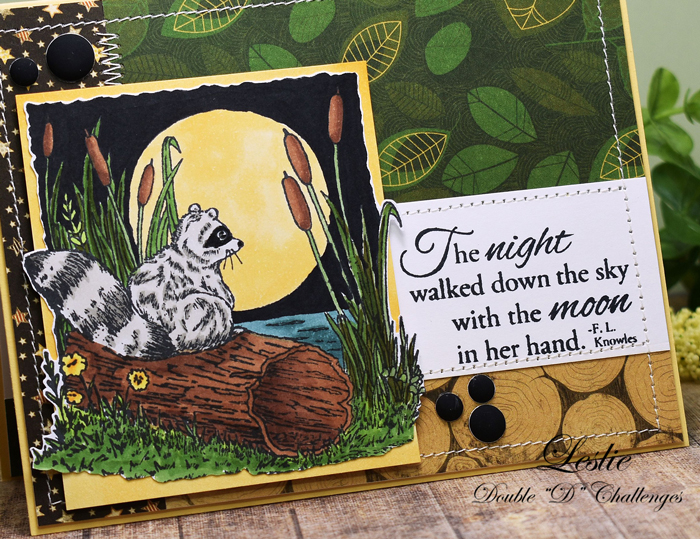 The stamp set is Inky Antic's Moonlight Raccoon, and the designer paper is Bo Bunny Camp-a-Lot.  I pieced and stitched some scraps and added Bo Bunny Matte Sprinkles to the finished card.  Coloring was done with Copics.

I just know you have a card idea that would be great for our Moon and Stars challenge.  Play along with us!

I'm glad you could stop by.  I'll be back on Friday with flowers.  See you soon!

What a wonderful card! I love the background paper and then there is the great scene you created. And that little critter is just too cute! Another slam dunk girl!

Fun fun scene with the cute raccoon, the moon, all those cool papers, stitching and the sentiment...awesome card!!!

OMG this is such a fun creation! Awesome coloring (as always) and your background papers are Perfect for the scene you've created! Well done my friend!!!

I love this little scene you made and the whole card layout with those pretty papers, the sewing and fantastic layers is awesome. Wonderful sentiment too.

I'm in love with this card! That little raccoon is just adorable and love the moon background! That sentiment is awesome as well! You always have the best sentiments! This little guy reminds me of the raccoon I had at my feeder! I've had to resort to taking the feeders down at night because he was robbing them blind! ha ha

ooooh, Leslie! What an engaging, gorgeous, mystical and magical creation! I literally DID start at the top and work my way to that lovely sentiment - making the whole natural scene seem beyond believable! IT'S GORGEOUS! I imagine you enjoyed a fun time matching your papers, image and sentiment to make this magnificent masterpiece! LOVE IT! hugs, de

The image is so darn cute and the papers in the background and the sentiment tie everything and are perfect for the challenge. Love that big moon behind the Raccoon.

So much outdoor beauty in your gorgeous Moon scape card design, Leslie. We can't wait for our Fall camping trip either, but still lots of gardening and harvesting to do. TFS your amazing card, my friend. Hugs

Fabulous, Leslie! That is a darling stamp with the racoon. And, that sentiment is just so awesome. I love it!!

And I forgot to mention the stitching around the outside! Looks amazing...

Fabulous card Leslie! What a great image for this challenge. You have created an awesome scene. I could see me sitting along the edge of the water on a log gazing into the moonlight. Once you get a taste of the outdoors it's like you can't get enough and you want to go, go all the time, at least that is how I am about traveling up north. I just wish we lived closer to be able to enjoy that outdoor vastness more often. It's amazing, and I know you agree! The sentiment is so perfect as well. Love this. TFS, Hugs,

Oh my goodness your little moonlight scene is just too adorable, I like how it is cut out and pretty papers to go with it. I would love this card but I know it would be great for a guy too, love those cards that are ok for either :) Like all the stitching you have done on it too, great summer time scene!

This scene is alluring and I love the masculine look, but that sentiment is surely feminine.

Any woman who loves nature would like this card. I love it, Leslie! The quote is beautiful and I love how the image and sentient work so well together. Your stitching is the icing on the cake! Lovely lovely design.

Wow! I love this card. The sentiment is so beautiful. Very touching and I can't imagine anyone not liking this card. Beautiful job on the whole design.

This is such a stunning card Leslie! Beautiful scene you have created with the gorgeous image and sentiment - I love the design.

Seriously Leslie, this card is gorgeous, this little moon lit scene looks so amazing and all of the beautiful details you added, like the awesome DSP and your impeccable stitching just completes this card perfectly.
The sentiment fits your sweet card beautifully.
Thank you for sharing.
XO
Maria.

What a unique card you created with the paper, sentiment and the scene you set up! I just love the raccoon looking at the moon. And of course the stitching just finshes the card off!

Such a fun nature scene...I’m in awe of all the papers and patterns you’ve used, too!! So glad you get to enjoy the outdoors with your new RV and I’m enjoying all your photos. I’m a female and this card definitely appeals to me, too! TFS!

I agree! This is a fun nature scene! What a wonderful stage you have set. And that sentiment, I have never seen/heard it but it is so poetic, so perfect, just so lovely! This is gorgeous!!!

This is beyond perfect! LOVE that image and ... well everything from the BG paper, the stitching, the sentiment to your incredible colouring!

What a cutie sitting there waiting. I like the masculine colors and the layout. I would say great guy card but it could go either way. How about great all around? :-)

This scene is so cute, and I LOVE that sentiment. Your stitching add such a fun touch too.

What a sweet, sweet card. Especially the greeting. I love everything about this card, it makes me smile!