Hello again!  While awaiting the arrival of a whole batch of newly released Power Poppy stamps I felt it was a good time to pull these not-yet-colored Pansies out of my digi box.

Pansies are such a pretty flower with a cheerful countenance, as though happy to be among the first to welcome springtime.  I didn't give my pansies much of a face with this coloring.  Just a bright spot of yellow and lots of rich violet. 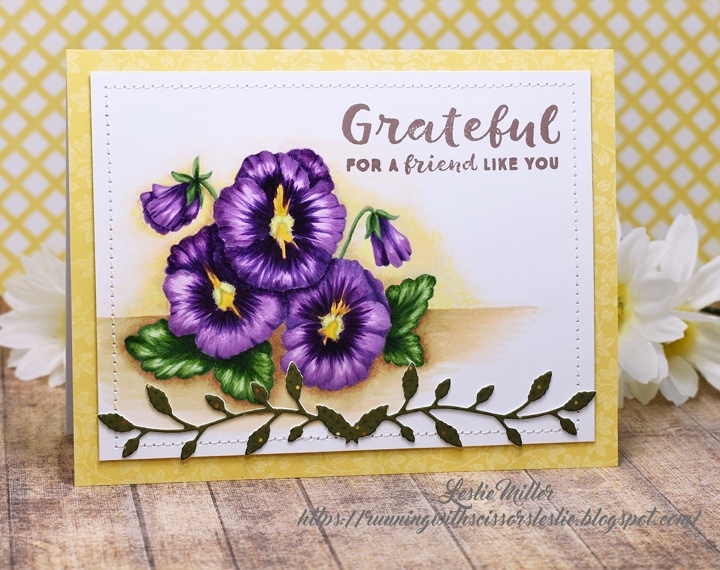 I lightened the image before printing so I could color no-line style.  No line coloring doesn't mean the image has to be practically invisible.  This was clear and distinct and easy to see the outline and suggested shading areas, but by the time it was colored the lines had all disappeared.  Darker colors like this are a sure thing for swallowing up those lines. 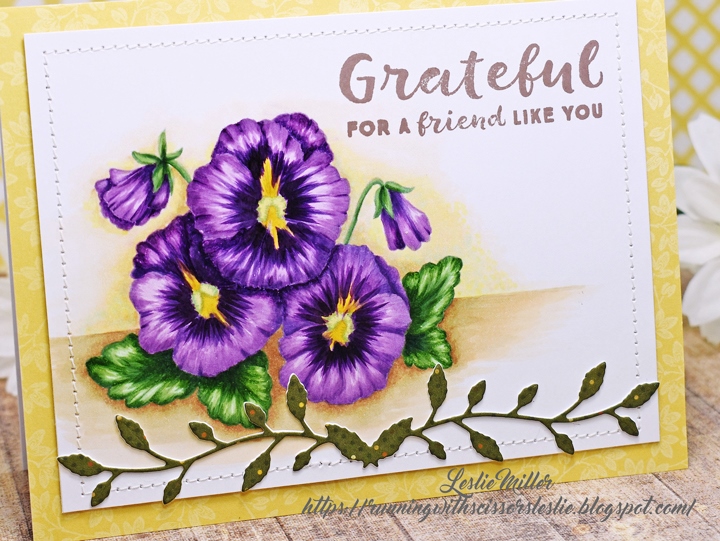 Flowers aren't always shy about their colors and markings.  The following Copics on X-Press It Blending Card produced vivid results: 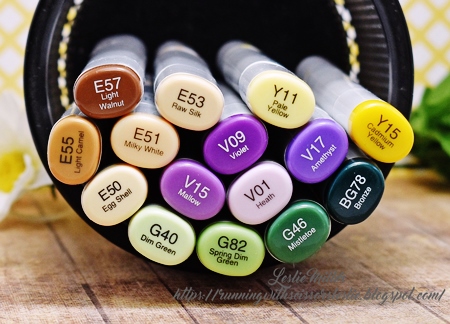 Old designer paper covers the card base, and the leafy border die is cut from another scrap.  Finished up with machine stitching.  The sentiment is from a Power Poppy clear set -- Nice Things to Say.

I'll be back soon.  Enjoy your weekend!

Pansies are one of my favorites! Your coloring looks amazing... No line coloring scares me! You did a fantastic job!

I guess I love all flowers because no matter which one I see on a card I always say I love it! Your pansies are wonderful and you do have a way with Copics. Me not so much! I'm always happy to visit and see what you are doing!

I could have sworn the pansies were watercolor. They are just spectacular in every way! A sweet friend gave me a gift certificate that I have been hording, so this looks it's going to find it's way into a PP shopping cart.

Leslie, wow beautiful copic colouring, your lines give such depth to the flowers. Stunning :)
Christine

pretty. A whole batch of Power Poppy stamps - lucky you. have a great day

Beautiful card, Leslie!! That no line coloring is somewhat tricky...but you pulled it off! Love pansies....they thrive here in Colorado!

What a lovely surprise to vist your blog and see my favorite flower! Your coloring is just so beautiful! I love the purple shades - always the ones I pick first. Thanks for putting a smile on my face. Happy Weekend!

WOW, your pansies are amazing and your coloring is always over the top, I can't even imagine what we will see when you take your class (cuz I don't think you need it)..just sayin'....no me, on the other hand need to take a coloring class for sure..lol! I can't wait to see your new poppy stamps, goodness the entire release of them was amazing!!

Well my dear, who doesn't love Pansies?? They are the cutest little flowers and they come in a gorgeous array of colors.
But my favorite is the purple or violet, with their bright yellow centers and delicate stems.
Your Copic coloring of this beautiful Power Poppy image is masterful, I love the way you highlighted the petals to give them their natural curve.
As always, love the stitching and the subtle detail of the vine a the bottom.
The friend who receives this card will be smiling from ear to ear, what a beauty!!!
I know how it feels to be waiting for Power Poppy goodies, please let us know which sets you got when they arrive.
Thank you for sharing this gorgeous card.
Hugs.
Maria.

So amazingly beautiful! I just love the no line coloring and the shading on these pansies is perfect. What a great design.

Beautiful no-line coloring, Leslie. I love your dark pansy colors and your highlighting. Your coloring brought your gorgeous image to life. TFS my friend. Hugs..

Wow, Gorgeous coloring, I really love how you did the center of the flower, and the feel of them sitting on a table. Love the border of leaves with it!!
Thanks so much for the info on how to get my comments in my email :)

Your pansies are so sweet Leslie! I'm in awe of your colouring skills, the shading really bring this flowers to live by adding so much visual dimension. Wow! Gorgeous card! xx

Gorgeous... you can no line color like nobody. the leafy die cut for the bottom and your stitching are perfect. Simply gorgeous.

Such beautiful and intense coloring! (I stopped by to say hello after you left such a nice comment on my blog about my "Dream of Genie" perfume bottle. And am glad I stopped in. Am now your newest follower!)

Simply AMAZING! I have yet to colour my digi pansies, only because I'm intimated by them! But you have mastered the colouring of flowers, not only these pansies, but all flowers. Always the right amount of shading in the right spots, perfect colours whether they are rich or pastel in shades, they look so real! And then to add 'no-line colouring' on top of that! Fabulous Leslie, love the stitching and your leafy die. Have a great weekend as well!

Oh my... I almost stopped breathing when I saw this ... AMAZING colouring!!

Simply gorgeous, Leslie!! Love the flowers, and of course, your signature stitching!

Love pansies! They are the flowers I've grown successfully in containers and they show their pretty blooms here from September to June. Your no line coloring is so gorgeous! and the bit of soft yellow is a good complement. I have that border die, love the way you've used it here!

I continue to be amazed at your coloring, Leslie! Those pansies are dimensional! Beautiful choice of colors for this wonderful card.

Oh, I love your pansies, and the colors are gorgeously vibrant! Wow, I love how much depth and "life" they have, and what a beautiful card with the layout and the sweet leaf die at the bottom! Stunning card, my friend! Hugs!