Happy Friday!  I don't know about you, but Friday sure sneaked up on me fast.  It was a busy week and I was not home enough for quality stamping time.  That's when I get in a hurry and nothing turns out worth a darn.  I've taken a notion that I want to reserve Fridays for flower cards.  Well, sheesh, it would be nice if I could actually color some flowers.  So after casting off several duds I thought maybe it was time to share something I colored last month. 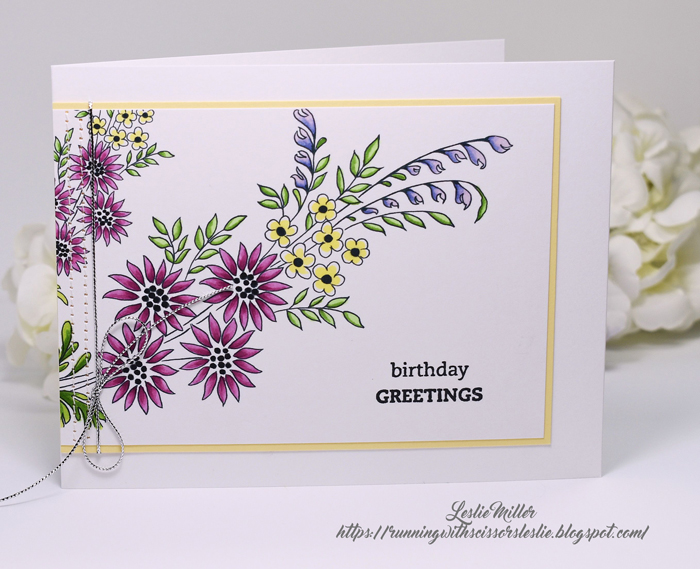 This is an extra super simple card.  Well, somewhat simple.  It didn't take much time, but I like it.  As stated in my title, it's a free digi.  You can find it here at the Digital Two for Tuesday blog.  There are two pretty flower images in that post, both embroidery designs.  This one had a vertical orientation, but by flipping it horizontally and dropping it off the side it made the smaller image appear to be in the background.  You'd never know this was a 1953 image.  It looks very current to me. 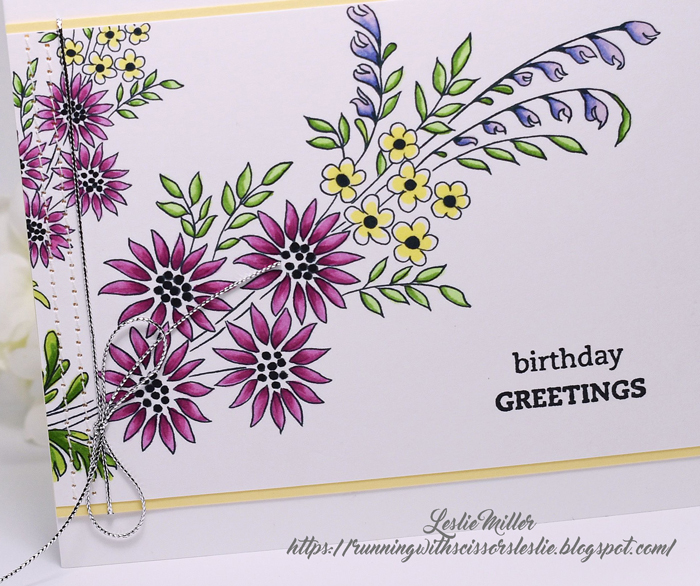 I added a double row of stitching and some silver cord.  A Stampin' Up sentiment.  Lots of white space.  I printed on Neenah Classic Crest Solar White and colored with Copic markers.  That's all, folks!  Hoping for better stamping times coming up.  I'd like to get ahead on my card needs before summer calls me away.  Have a happy weekend!

Love, love, love! Leslie, you can take any image, add your touch and it's gorgeous! Such a simple card, yet so pretty! I looked at the digi many times when I visit Digital Two, and never saw what you seen in this image. Love that's it angled on your card, and all the white space. A bit of stitching, some cord, a little sentiment and your done! Amazing. I can't imagine you have 'duds'! Thank for sharing your amazing talent. Have a happy weekend as well!

Oh Leslie - I love this card!! The image is wonderful and the way you colored it is fabulous!! I'm off to check out the free image.

LOVE this! And I'm betting the cards you threw away are still better than anything I have kept! Your flower cards are awesome & this is no exception!
I'll have to stop by the site as I love this flower! Hope you have more free time soon! You need to just make time for YOU!!

Leslie, this is so sweet! What a lovely design and your coloring is "top notch" as always. I need to step into the digi world. I'm such a stamp person, being a SU demonstrator, I really need to expand my wings and just fly with it. Think I'll go check out this free Digi. Thanks so much for all you do; your inspiration is delightful! P.S. How's Wally and Lulu and Rick? Hope all is well. Hugs !

What a beautiful array of gorgeous flowers. And, you colored them so perfectly and they certainly do look like a gorgoeus spring design. So glad you shared this beauty. I so admire those who do great things with digitals.

Leslie, I find it hard to believe that anything you create is a.....what did you call it?.....a "dud"?
LOL!! no way, my dear!!!
This card is beautiful, those flowers look amazing the way you colored them, placing the image on an angle like that and adding the silver thread makes this sweet card look truly elegant.
I would love to see your "duds", LOL!!
Hugs.
Maria Rodriguez.

Fabulous CAS card. I love how the spry of flowers stretches across the card and the little bit of silver cording adds just the right touch.

Your Copic colored pretty flowers do look very trendy. Who would have guessed the image is a digital image from 1953:-) TFS your Springtime beauty, my friend. Hugs..

Your flower cards are always a special joy to my heart, Leslie. Floral Friday. I like that! This delicate beauty is so sweet with the soft yellow mat, and the sentiment is the right size so it doesn't detract from the pretty arrangement. Lovely! xx

What a pretty arrangement of flowers. Hard to believe from 1953. Love your coloring. Too bad I can't dig into your garbage can - I'll take your throw aways!! Have a wonderful Palm Sunday!

It is so hard for me to even imagine that you would ever have a dud while coloring, you really knocked this one out of the park it is just beautiful!! I so totally love the way you put it on it's side and neat idea to stitch the sides. Adding the cord is such a lovely touch. LOVE IT!

GORGEOUS! I'm always in awe of your creativity! LOVE your horizontal design and of course your perfect coloring! What a beautiful card you have designed my friend! No I would never have thought this was a 1953 image ... so new & fresh looking! Simply beautiful Leslie!! Have a great weekend!!

I love white cards! I love flower cards. I swear you can make the simplest image look like a Rembrandt!
Dud and Leslie? Which of these things are not like the other?
(You can take a little time off for summer as long as you take your camera with)

Oh, Leslie, I love this card! I agree that this does not look like a 1953 image, and I love the colors you've chosen. Simply beautiful and elegant with the angle and piercing. And I love the silver cord with the yellow mat. Truly a beautiful card, and you know I love digis. I really appreciate your sharing these, because they are simply beautiful and allow for making multiples. Given that my craft room will be topsy turvy next week (having impact windows installed), I just may print some of these out and find a hide-away and color a bit. Haha! But they say it will take only two days (but it's going to take me days to prepare and days to get back to normal). All will be well, and these are the best people. Anyway, I agree with Pauline -- I doubt you are capable of duds! Looking forward to seeing more beautiful cards -- before you are off this summer driving around in that RV! Hugs!

Wow, this is sensational, Leslie! Adding the stitching was a genius idea and your coloring is perfection! This pretty image reminds me of hand-embroidered pillow cases from the olden days. Do you remember those? I still have a few, but I don't use them because they are too pretty to use. Seeing this makes me think I will start to use them. I mean, it's like having china and never using it. Then your kids don't want the old timey stuff and take it all to Goodwill, haha! Hugs, Darnell

This is such a "lively" card with those delicate flowers and the beautiful coloring. The design off the edge is such a neat idea, balancing the white space on the other side. It's a beautiful happy card, Leslie.

Your floral cards are the best! You have inspired me to do some coloring, but I'm not ready to share any yet..lol!

Stunning!! I could just stare at this for ages... Beautifully done!

Simple but stunning! I love this image, and agree with Darnelle. Some things are timeless, like flower images and your gorgeous coloring!
I"m in love with the stitching, must get out my little Janome and use it. I'm amazed at the difference th pale yellow mat makes. I learn so much from you, Leslie. Sending hugs and thanks.

Not sure how this slipped through my blog feed. Wow, this is fantastic. Girl, you got mad skillz

Stunning card full of gorgeous Spring colors and speaking of, your coloring is amazing, always love to see it. What a beautiful image, I have several of hers saved somewhere and I would of thought this was a stamp set...it should be! Love~love this!!! Sorry it took me so long to get here, we were gone to check things out at the 'north' house as we call it. and your Flower Friday sounds fun!!

So beautifully colored and crafted Leslie! Love it!

This is a pretty one Leslie! Another CAS masterpiece! ♥ Sue Kment