Bright and Fun for a Birthday Boy

Hi there!  I'd like to start off by saying that yesterday was my birthday and my family and friends, local and afar, made it a very special week for me.  Your birthday is the one day that, in your life, belongs to you, alone, and when it's recognized and celebrated it makes you feel extra good.  One local friend even helped Wally and LuLu send a birthday card to me.  So... thank you everyone!!

Now, for today's card... I've had the parts cut and the image stamped and everything ready to color and put together ever since I used the Sparkle N Sprinkle Cars set for the first time last month.  Same designer paper, but different theme and accents.  I get such a kick out of making kids' cards -- so bright and fun -- but I really don't have much chance to use them.  However, this one is going with a batch I'm giving to a friend. 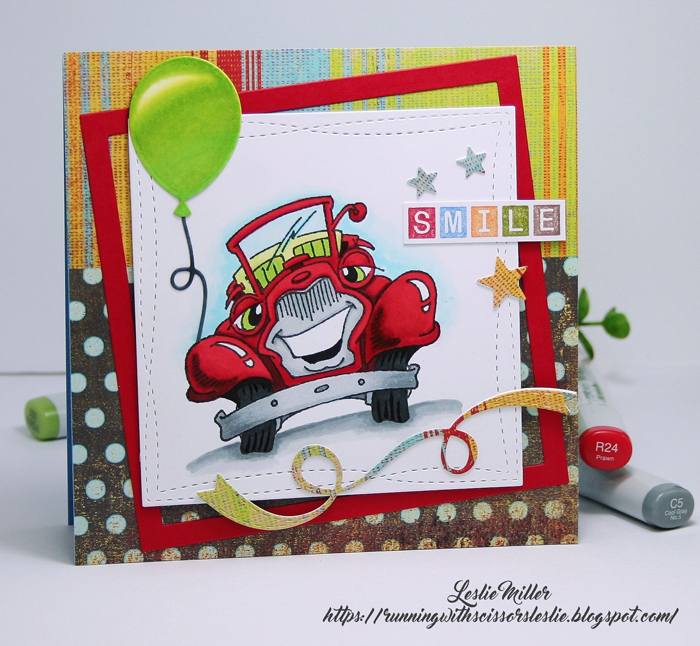 That's two cards done for her and many, many to go.  When I told my husband I needed lots of cards and only had two done he said "Only two?  What do you do in there?"  Sheesh.  These cards don't make themselves you know!  Never mind that I'm probably the world's slowest stamper.  I spend too much time thinking and visualizing and pushing parts around before anything is glued down.  I've never wanted to hurry the process, but sometimes I wish... sigh...

The ingredients listed below my signature will pretty much explain the card so I'll just mention a couple of things.  Coloring was done with Copics, including the balloon.  I used Stampin' Up! markers to color each letter of the sentiment.  Inside looks like this: 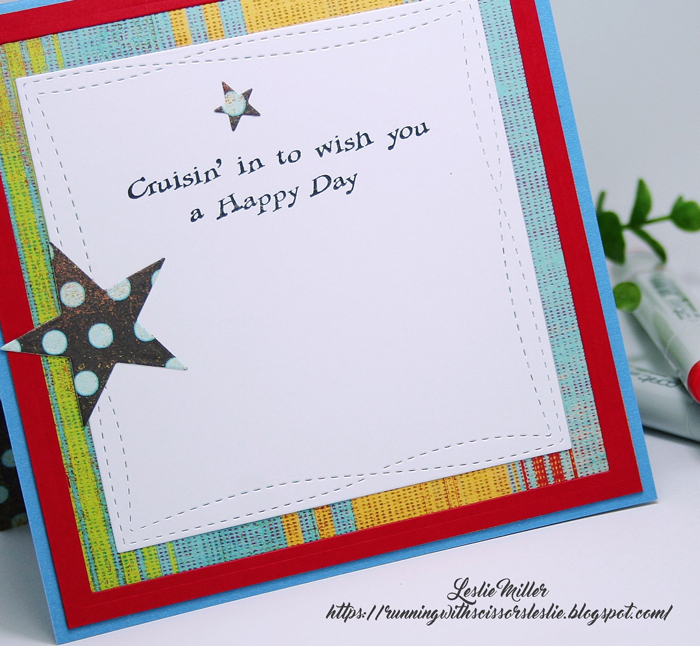 I'm not sure how apparent it is in the photo, but the red border is a frame.

And that's that!  Lots of fun.  Onto more grown up stuff the rest of the week but, really, it's all just grown up play, isn't it?  Have a great day!

Belated Happy Birthday Lovely lady!! I'm so glad you had a good day and even cards from your fur babies too! This make is a stunner... The colours the design... Just perfection! Have another great day my friend!

Happy belated Birthday Leslie! Sounds like you had a wonderful day, especially the birthday cards from Wally & Lulu, how sweet! OMG love your card, so vibrant and fun! Love all the layers and details your put into your card - hence that is why it takes you a while, but I'm with you, you can't rush the process. And those are the exact words that Bill says to me "what are you doing in there" - too funny, they have no idea the thought and process that goes into card making! hehe! After seeing your card, it makes me want to go straight to my stamping place and create. Maybe later today, as I'm off and I have a dental appt - small cavity :(. Wishing you a wonderful day, and looking forward to seeing more of your beautiful cards.

Wow, a wonderful card with all the layers and a fabulous design, it made me smile as soon as I looked at it!
Love all those neat dies you have used on this too, and I see a few I 'need'..yep really I do! Glad you had a good birthday, I too received some very nice cards...so thank you for the beautiful one you sent to me,I LOVE it..I made my hubby look at all of them, then he was afraid to give me his..lol...but he did good, though he kept asking me if I liked it..hah! Glad Wally and Lulu came thru for you, too lol!!

Happy Belated Birthday Leslie! May the Lord continue to richly bless you. I laughed out loud at your story about what your husband said. I can identify with that when I'm designing cards. Your card gave me a huge smile this morning. I love all the details you add to your cards. You are so talented. I'm so glad you share your creations with us.

Sending Birthday Wishes right along! Sounds like you had a great day; hope you have a great year. Your kids cards are always so cheerful and uplifting. I'd like to share a cause that collects cards for kids for distribution to hospitals around the country and in Canada. It's Send A Smile 4 Kids and I'm sure they'd welcome having your works of art when you have extra!

I too had to smile at what your husband said. Let him watch a video of someone coloring to perfection like you do... he will get it then. Because I work in the kitchen, my husband sees the process(and that every available counter space is filled with something) and does not ask any more.Like the others this card made me smile. I love all the perfectly placed accents especially that little squiggle thing. Fun, Fun, card.

Happy belated birthday Leslie..
I too had to smile at your husbands comment! boy do I mess around too, takes forever to make a card.
Love this fantastic make, what a gorgeous image and your colouring is just amazing, wonderful layout.
Hugs Pam x

cute image and yes bright and fun. Have a great day

Such a fabulous card that ANYONE would enjoy, EVEN a child LOL your coloring is just fabulous, and I love all the red highlights throughout your design, plus those happy papers so full of movement and joy! Your hubby is too cute - mine always laughs - and says, another $250 card - LOL - he totally "gets it" as he has hobbies, too. Love that your friend made a card on behalf of the fur children, and so grateful your day was special - extra special it should be for such a caring, thoughtful friend as you. hugs, de

Anothing amazing card by Leslie:) It will bring happiness to at least a couple people - your friend who gets it from you, and then the recipient who gets it from her! Love your coloring and the die cuts. Glad you had a nice day on your birthday, and very cool that you got a card from Wally and Lulu.

First of all HaPpY BiRtHdAy to you! Glad you had a nice day. Your friend sure is lucky..another great card for her stash. That image is so fun and I like how you paired it with the wonky stitches..so fun!!!!

Oh no! I missed. I must put the date on my calendar! Such an adorable card. Just love everything you did for it. And your coloring - just amazing! Happy belated birthday!

Let me first start off wishing you a "Happy Birthday"! Sounds like you had a wonderful time. I love my birthday as well and enjoy celbrating it with family and friends. I also love your card. Our Rachel is going to start driving soon and this would be a cute card for her. She as been looking for a cute car - whatever that means - and I think this would fit the bill. I love the smile on the car - so cute!!

No one would think this was hand-colored....except a card-maker with the card in hand, I suppose! It's just terrific, Leslie! (A belated Happy Birthday, too!)

Glad you had such a great celebration of your day, I agree it is wonderful to have a day set aside for just you and hope it made you feel as special as you are!
This card is so fun and way too cute, terrific coloring, the balloon looks so dimensional with the coloring and love the other festive dies you have used with it. Like the offset framing and how you followed that to the inside!

Happy belated birthday! I'm marking my calendar because I'm not going to miss your special day next year! I loved your post and chuckled. Don't ever change! We slow pokes enjoy the process of creating and that's a good thing (she smiles). I'm enjoying creating making children's cards a lot more these days (laughing). Whimsical wasn't my thing in the beginning. But now? Oh my goodness I love some of the cute critters and all the fun die cuts to make interactive cards. What a master at pairing patterned papers you are! Lots of wonderful detail that will catch the little recipients eye! Two down and lots more enjoyment to go (she smiles).

What a hoot! I will remember your husband's question next time I'm in my craft room and laugh out loud! It really IS a good question, something I wonder at myself. I loved reading that you spend time moving papers around too. I'm so grateful we have a hobby that we can get lost in.
As for the card, it is a delight to the eyes! Full of color and all the parts you 'moved around' came together wonderfully. Whoever receives this card will feel as if they are holding a party in their hands!
Belated happy birthday to you, Leslie.

Sorry to be late to comment! I've had my head down working on design team projects! This is super cute! I love your husband's question. I spend hours and accomplish very little. It's the nature of the beast!

First... happy belated birthday! I totally forgot with everything going on here, forgive me sweet friend. I hope the puppies spoiled you and Rich too. Sweet birthday hugs!!!! Second this card is adorable. What a fun ride and the colors and vibrant and cheerful!

Oh, Leslie, a belated happy birthday! YOU deserve a special day, and I cherish your friendship over the years and thank you for inspiring me so much. I absolutely LOVE this card, and it made me smile on this rainy day. That car has real personality! And I love the whole design including that sweet balloon! Yes, most guys don't realize all that goes into most of our cards...especially one as sweet and detailed as this one. I'm a slow one as well, and it is what it is. But the end result is PERFECT! Don't ever change a thing! Birthday hugs and wishes for a beautiful year to come!