Happy Monday!  Has the weekend gotten you a little more caught up yet?  I'm picking away at my to do list.  Most of my cards are in the mail now, but still a couple more to make.  Next year I'm starting sooner, honestly.

These two cards were made in a quicker jiffy than they may appear.  I cut a frame with a tag die for the card on the right, then used what popped out of the center for the card on the left.  The poinsettias with foliage were done with one die which cuts everything at once -- both right and left.  I die cut two bows.  Die cut a designer paper panel for one card, and entirely covered the other card front.  Supplies are listed below. 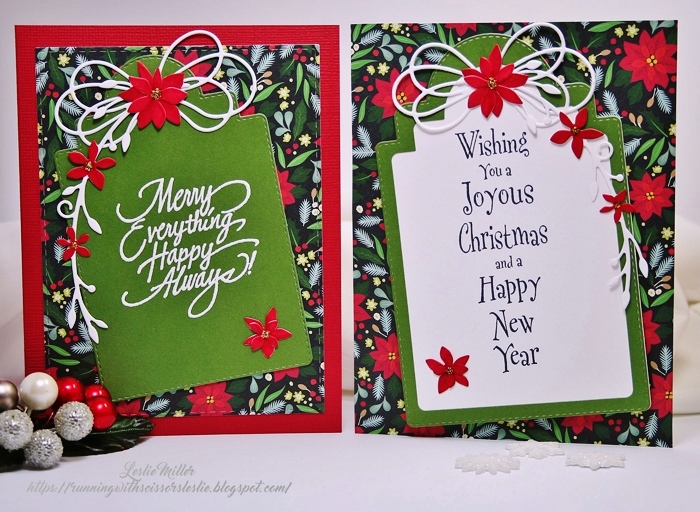 After all the cutting was done I colored the poinsettias with a red Copic.  This die cuts enough flowers to double layer each one, but I only layered the largest flower.  For balance I put the extra flowers in the lower corner.  Dotted the flower centers with gold Stickles after assembly. 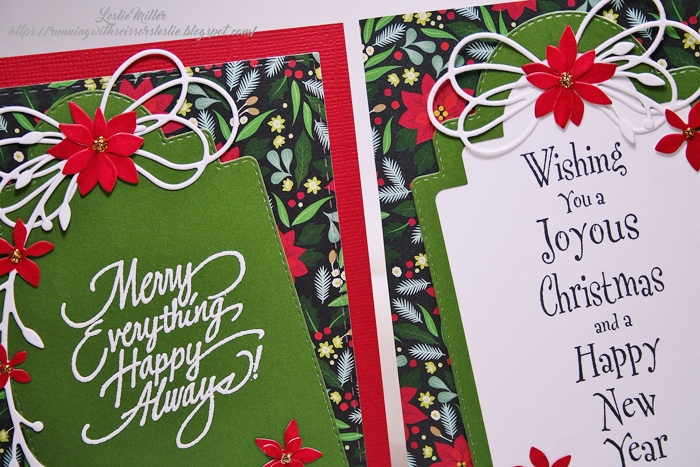 Old timey sentiments from my collection.  Designer paper is American Crafts Kringle and Co. from last year, I think.

I'll be back shortly.  I haven't been photographing every card because sometimes it just gets to be too much.  Who has the time?  Merry, merry!

Both of your cards are amazing. Very similar but also quite different! I do love the bow die you used!

These are so pretty, Leslie! I'll say it again - you have the best dies!!! And, you put the pieces together so beautifully, always.

Both looks great and so pretty Leslie. I like the poinsettias and great dies too.

These are both gorgeous! Can't believe you were able to put them together so quickly! They look like they took hours! That bow die cut is awesome! And beautiful paper choice!

So beautiful and festive Leslie. TFS both cards. Hugs, Nancy

These cards are beautiful! The dies are fabulous - on my wish list now!!!

Oh wow these are Gorgeous, I totally love how you used the die and the bow works just perfectly with it too. Pretty papers to compliment them too!!!

These are terrific! So vibrant in color, to begin with...and the design and sentiments are perfect.

These are so pretty!! I love your designs Leslie ... The paper is perfect for your tag fronts!

Hi Leslie! Wonderful cards, Yes, those little flower dies are the best. Love them. I hear ya sister, about blogging every card! Sheesh, time consuming. On your santa card below, I love how you partially embossed on the corner of the card! I have to remember that! If I don't talk you you again, have a wonderful holiday!

What festive looking cards! I love Poinsettias! When we were in Lancaster the other week the garden store had so many different varieties. I think they dress up a room and your cards will certainly dress up where ever they are going!

You have such great ideas! These are so bright and cheerful for the holidays!

Beautifully created with your beautiful dies!! I love how you used the cutout from one to make the second...very smart and very creative! Both cards are beautiful! I received a very wonderful card from a very wonderful 'friend"..gee wonder who that might be...lol...I LOVED it, it is so 'me'...thank you so much! I hope to get all mine in the mail on Monday at least to my out of town friends!..My life has been crazy here, let alone the weather..ugh! Have a wonderful holiday season!!

So pretty and festive, Leslie!! I love the contrast of colors...and must've been in a vulnerable state...because I actually went and ordered the bow die and Laurel die after seeing these two cards! I can usually say no...but I need to cut out bulk and love the feminine bow and versatility in those flowers! Thanks so much for sharing your lovely work.

Both are beautiful cards Leslie! I can't believe how far behind I am in commenting on your posts. It's seems like forever since I've been here, so I'm catching up. Love the MB Seraphone Laurel die,I think I might need this as well. Great designer paper and great layout. So pretty & festive.

Oh, these are gorgeous! I love the DP that is so rich, and I LOVE that bow (that I had to get!). Beautifully done, and you sure are a card-making machine!! Hugs!

Even prettier in person! I should know! Thanks for thinking of me!